Every profession has its in-jokes, and palaeontology is no exception. The convention of naming a newly described species in Latin offers a suitably cryptic occasion to depart from its solemnities. Since this short chapter is peppered with forbidding names, it may be as well to explain that Whatcheeria refers to the town near its find spot, What Cheer, in Iowa; Casineria is dog Latin for ‘Cheese Bay’ near Edinburgh, where it was found; and Eldeceeon was named after Scotland’s Livingston Development Corporation (LDC), which contributed to the purchase of the specimen. The fossil Pederpes finneyae, from near Dumbarton, was named after its finder Peder Aspen – who had the same number of digits on his foot, or pes, as this animal – and its preparer Sarah Finney. Unfortunately there are no homely names for long extinct animals.

From a biblical standpoint, the transition from primarily aquatic to fully terrestrial animals is of particular interest, because the cataclysm that destroyed the Earth blotted out only terrestrial animals. Fish and other marine creatures could have evolved from larva-like forms, and amphibians could have evolved from fish fish – ‘could have’ because nature is inherently wonderful, and the tadpole-to-frog cycle shows what the genetic code is capable of. Terrestrial animals, however, could not have survived the bombardment. Were it not for the construction of a protective ark that saved breeding pairs of every species, land environments could not have been re-stocked. Terrestrial species also underwent huge evolutionary change as they recolonised the earth, but their evolution did not begin in the sea.

Thus the story of how ‘animals conquered the land’ divides into two parts, one a transition from fish to marine amphibian, the other a transition from amphibian to terrestrial amniote. While the first has been well publicised, the second remains befogged. Who has heard of Pederpes, the animal that according to Kutschera and Niklas, demonstrates the second transition? Dating to the earliest subdivision of the Carboniferous period, the Tournasian, the fossil occurs at just the right time: after the first aquatic tetrapods Acanthostega and Ichthyostega and before terrestrial tetrapods such as Casineria. Whereas the swimming tetrapods had polydactyl paddle-like feet that pointed back or to the side, the feet of Pederpes had five digits and pointed forward, consistent with locomotion on land. Why has not more been made of this creature?

Mainly because the scenario of progressive adaptation to life out of water has turned out to be rather problematic. For two reasons. One is that the closest relative of Pederpes, Whatcheeria, of the same family, is slightly more aquatic in form and seems to have inhabited lakes and swamps. The other is that Pederpes no longer seems to have been the first of its kind, since there is evidence that whatcheeriids were also contemporary with Acanthostega and Ichthyostega, in the late Devonian (Olive et al. 2016). Thus the case for interpreting Pederpes as an evolutionary advance on those tetrapods founders. It appears too soon. If all three lineages stemmed from lobe-fins, their common ancestor must have been earlier in the Devonian or even Silurian. Yet lobe-fins themselves did not appear until the early Devonian.

A character analysis of early tetrapods performed for the initial report on Pederpes seemed to confirm that whatcheeriids were closest to the Devonian forms. However, the analysis was subsequently conceded to be ‘not particularly robust’ (Clack & Finney 2005), and a more comprehensive analysis the following year (Ruta et al. 2003) suggested they were more advanced.

Clack and Finney looked into why their conclusions were so different. One exercise involved aligning their dataset as closely as possible with that of Ruta et al.. The result was surprising. After Acanthostega, the next to evolve in their reconstructed ancestral tree were a pair consisting of the tetrapod Ichthyostega and the fish Eusthenopteron. Then came Crassigyrinus, a mysterious creature that has always been interpreted by Clack as ‘secondarily aquatic’, i.e. it had evolved from a fish, then re-acquired some of its fish-like features as it returned to the water (or deeper water) and its limbs shrunk. Then came Pederpes, followed by 17 progressively more advanced tetrapods.

The results made no sense. Although the exercise assumed that all such animals were related, these first four were obviously very different from each other. As Ruta et al.. had commented previously, ‘there is no well-supported, let alone stable, hypothesis of early tetrapod phylogeny.’ The early tetrapods were too diverse to be shoe-horned into the same evolutionary tree. Clack and Finney described their attempt to get to the bottom of the discrepancies as ‘inconclusive’, suspecting ‘some unconscious bias in the way characters are selected and formulated’. 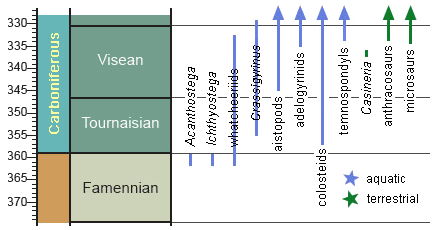 Tetrapod fossils from the Tournasian used to be extremely scarce, with Pederpes the only articulated specimen known. Now, however, several localities not that distant from Dumbarton in the early Carboniferous (including Nova Scotia) are beginning to yield more identifiable material. Plants (including charcoal debris), myriapods and scorpions associated with the animals show that the environments were at least semi-terrestrial.

As more Tournasian fossils are discovered, the problem of how to link the early tetrapods into a single phylogeny including the Tournasian and Visean specimens becomes only greater (Marjanovic & Laurin 2019); the problem identified by Clack and Finney has not gone away. Other groups that suddenly appeared – or re-appeared – in the Visean include aïstopods, adelogyrinids, anthracosaurs, microsaurs, colosteids and temnospondyls, all of them highly ‘derived’ (remote from the presumed ancestral condition). ‘Some were strictly aquatic, others probably as truly terrestrial as any amphibian could be. Some had greatly elongated bodies with hundreds of vertebrae, others as few as 15. Some presumably lived inconspicuously in the leaf litter, others were highly adapted toward burrowing habits, while still others were agile forms, suited for living in the forest or open ground.’ (Carroll & Gaskill 1978) The snake-like aïstopods had no limbs, nor even limb girdles, but suggest a tetrapod past because of certain features of the skull, vertebrae and ribs.

If it is true that aïstopods evolved from animals with limbs, then ‘the existence of such a specialized animal so early in the fossil record of tetrapods shows that a great deal of evolutionary diversification and adaptation must have taken place in the time since tetrapods first evolved’ (Clack 2002). But when was that? The time when aïstopods had limbs could hardly be later than mid Devonian, and that would have been after the tetrapod line split into the branches that became Acanthostega, Ichthyostega, whatcheeriids, Crassigyrinus, aïstopods, adelogyrinids, anthracosaurs, microsaurs, colosteids and temnospondyls. One ought to be looking for the origin of tetrapods before the Devonian, as was apparent just from considering the first three in the list, not to mention tetrapod tracks in the mid Devonian.

The most abundant and diverse of the early tetrapods were the temnospondyls. They had gills and a lateral line system, laid their eggs in the water, and some groups underwent metamorphosis. One group would later evolve into frogs. Some temnospondyls became progressively more rather than less aquatic. Balanerpeton, from the late-Visean East Kirkton Limestone quarry in Bathgate, between Glasgow and Edinburgh, showed no evidence of gills or a lateral line system. It lived at the margin of a forest-fringed lake. Fish included ray-fins, lobe-fins, acanthodians and even sharks. The most common terrestrial arthropods were scorpions. A temnospondyl from a site in Germany dating to about the same time is aquatic.

Exclusively terrestrial forms forms are uncommon in the Early Carboniferous. Amongst the earliest are Eldeceeon (an anthracosaur) and Westlothiana (an anthracosaur or microsaur), both from the East Kirkton site. Another terrestrial tetrapod from the Visean was Casineria, also from Scotland: a mouse-sized creature notable for having the earliest known pentadactyl hand (manus), as against the eight digits of Acanthostega. The digits and curved claws were designed for gripping. Again, the existence of such an ‘advanced’ tetrapod so early in the record is evidence against the presumption that terrestrial vertebrates – amniotes in particular – descended from aquatic ones. As Marcel van Tuinen and Elizabeth Hadly put it, ‘At face value, the fossil record suggests that amniotes diversified rapidly from uncertain immediate ancestors.’ Perhaps that rather cryptic confession is another in-joke! Robert Carroll is more explicit: ‘The numerous lineages that appear at the end of the Lower Carboniferous are diverse and distinct from one another and do not present features that permit the confident assignment of relationships either to the Devonian taxa [notably Acanthostega and Ichthyostega] or among the several lineages themselves.’

Whether a tetrapod was an amniote or a non-amniote is the critical question. An amniote is an animal whose egg is fertilised internally, enabling it to reproduce on land rather than in the water. As well as entailing different instincts as to how to go about reproducing, this required a radically different design of egg, in which the embryo was protected in a membrane, called the amnion, a yolk supplied food to the embryo, nitrogenous waste was stored as solid crystals, and carbon dioxide waste passed out through a semi-permeable all-enclosing shell. ‘Food’ included the twenty protein-building amino acids, vitamins, a variety of energy-rich fats and digestible minerals, and cholesterol for building the cell walls.

Fishes and amphibians produce many small eggs, fertilised by males shedding sperm in their direction in the water. The eggs hatch into larvae, which later metamorphose into adults. Amniotes – reptiles, birds and mammals – produce few, larger eggs, and either lay them externally until they hatch or give birth to their young straight from the womb. The amniote egg is an example of irreducible complexity: all the parts needed to be functioning from the start, as an integrated whole. There is no plausible scenario whereby the system might have evolved by infinitesimal steps, each step a functional system in its own right.

What was going on in the tetrapod landscape was similar to what was going on in the plant landscape. Amniote eggs were radically different from water-laid spawn, just as seeds were radically different from water-laid spores. Seeds appeared before amniotes because plants spread more quickly than animals. But there wasn’t a big time difference. Things were changing not so much because continental environments were getting less watery, as because the land was being colonised by animals that had always been terrestrial. Notwithstanding its small size, Casineria was the first vertebrate in the fossil record to have originated from the ark.

There is nothing inconceivable about the idea that aquatic tetrapods might have evolved a terrestrial lifestyle. Turtles did this in the Mesozoic (having originated from terrestrial reptiles), toads did this, and there is no reason, a priori, why other tetrapods might not have done so in the Palaeozoic. The question is whether, specifically during the Tournasian, they actually did. As things stand, no Lower Carboniferous tetrapod can be linked phylogenetically to either Acanthostega or Ichthyostega, so the transition is undocumented. Pederpes is not an ‘intermediate grade between primary aquatic Upper Devonian amphibians and early tetrapods’. And that, no doubt, is why it continues to be well-known only among specialists.