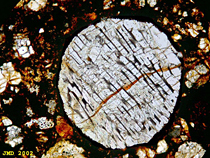 Asteroids number in the millions and range from 930 km across to less than a few metres. They are classified according to their mineral content, which, in the case of the bigger ones, can be inferred from their spectra. There is more than one classification scheme, but the bulk of the population can be analysed into three groups. C-type asteroids (‘c’ for carbon) comprise about 75% of the total, have very dark surfaces and are similar in composition to carbonaceous chondrites, the most common class of meteorite. S-types (‘s’ for stone) comprise about 15%, contain various silicate compounds and a certain amount of nickel and/or iron and are the source of ordinary chondrites. The remaining 10% is made up mostly of M-types (‘m’ for metal), having spectra that suggest a predominantly iron content and thus a link with iron meteorites. Contrary to the expectations of the nebula hypothesis, it is now clear that they do not form an orderly compositional gradient across the main belt between Mars and Jupiter but are jumbled together, especially the smaller ones.

Within the various types, some asteroids can also be grouped into families, each representing a body that broke up into multitudinous smaller pieces. The biggest such group is the Flora family. It comprises over 800 asteroids of the S type, arising from the break-up of an asteroid around 200 km across. There are around 64 known families in the asteroid belt. About 50% of the family-forming collisions may have occured in the first 500 million years since 4.5 billion years ago (Marzari et al. 1999).

Vesta, 530 km in diameter, is a rare example of a large, close-to-original parent body. It is thought to have spawned the V-type asteroids and the ‘HED’ group of achrondritic meteorites, most if not all of which would have derived from two enormous impact craters, 500 and 400 km wide and some 13 km deep, near its south pole. Vesta was large enough to have differentiated into mantle and core, as internal melting caused light minerals (silicates) to float towards the surface and heavy minerals (rich in iron) to sink towards the centre. The source of the heat is uncertain, for although the asteroid formed very early, only 2–4 million years after CAIs, the heat generated by radioactivity seems to have been insufficient to cause large-scale melting (Kunihiro et al 2004, Sokol et al 2007). Possibly Vesta derived from the explosion of a still larger molten body and was already molten when it formed.

Whatever its origin, Vesta is exceptional. It is the second largest asteroid in the main belt and the only one known to have differentiated. Iron meteorites and M-type asteroids show that there once existed other bodies large enough to have differentiated to the point of producing a metal core, but these asteroids are the result of disaggregation rather than aggregation, small chips off larger bodies that have long since perished. Some asteroids, such as Itokawa, an S-type body, are loosely bound ‘rubble piles’. They grew from the dust and boulders produced by the break-up of older, more coherent bodies; they are not first-generation asteroids, and they are not on the way to becoming monolithic planetesimals. Itokawa’s porosity is 40%. Repeated impacts have failed to tamp it down into anything more solid.

Meteorites are asteroid fragments that land on Earth. There are two main types: those that underwent heating but not melting (chondrites) and those that experienced heating, melting and differentiation (achondrites such as the HED family, stony-irons and irons). As argued in section 3, the chondrites are aggregations of fine material (condensates, melt droplets, lithic fragments and ash) that issued from exploded planets. The immediate forbears of the achondrites – Vesta being the only extant example of such a forbear – were probably coherent masses of expelled molten material. The heterogeneity of Vesta’s bulk composition indicates that the planet from which it originated had not differentiated, or at least not fully. It appears somewhat younger than most chondrites because it did not solidify until somewhat later.

Assuming that all terrestrial planets started out with the same composition, metal cores should comprise around 15% of their volume, with the other 85% consisting of olivine-rich mantle and thin plagioclase-rich crust. Thus in principle, asteroids of mantle silicate composition should be 5–6 times more plentiful than those composed of iron. They are, however, ‘astonishingly rare’ (Haack & McCoy 2005). The problem posed by the scarcity of olivine-rich asteroids compared to the abundance of metal-rich asteroids even has a name: ‘the great dunite shortage’ (dunite being rock composed of olivine). 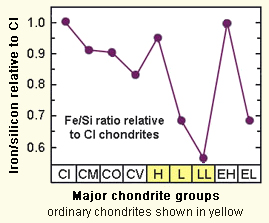 The iron content of chondrites varies enormously, depending on type (see diagram). By far the most common group (over 90%) are the ordinary chondrites, which contain abundant chondrules, relatively sparse matrix, few refractory inclusions and 1.5–8 % iron. Relative to the bulk composition of the Earth, most chondrites are therefore depleted in iron.

Analysis has confirmed that the olivine grains within chondrules derive from mantle material (Libourel & Krot 2007). In terms of the nebula hypothesis: ‘Chondrules are not as pristine as conventionally viewed; instead, they consist of nebular and asteroidal materials and must have postdated accretion, thermal metamorphism and differentiation of some early generation planetesimals.’ If chondritic asteroids, as sampled by chondrites, were to be completely melted and differentiated, the resultant body would comprise a metallic core, a thick olivine-dominated mantle and a thin, predominantly basaltic crust (Greenwood et al. 2015). The problem posed by the shortage of differentiated, olivine-rich asteroids is solved by recognising that olivine and other such silicates are the main ingredients of chondrites. In terms of the exploded planet hypothesis, they represent the primitive mantle of one or more former planets that exploded before they could melt and fully differentiate. Achondrites derive from exploded material that subsequently re-assembled into large bodies and differentiated. The recipe for a complete planet is: chondrites (comprising CAIs, chondrules and matrix) + achondrites.

Two predictions arise from this scenario. One is that if some or most iron meteorites are associated with CAIs and chondrules rather than with the Vesta generation, they should be approximately the same age as them (within the margins of differing crystallisation rates, for it is crystallisation that is being dated). It turns out that they are. Tungsten isotope data show that metal-silicate differentiation in the parent or parents of magmatic iron meteorites occurred ‘extremely early’, coeval with the first chondrules (Schersten et al. 2006, Qin et al. 2008). ‘Chondrites do not represent the precursor material from which asteroids accreted and then differentiated’ (Kleine et al. 2005). Instead they ‘derive from asteroids that accreted late  [possibly] by re-accretion of debris produced during collisional disruption of older asteroids’.

The other prediction concerns the size and nature of the bodies from which the iron meteorites derived: the meteorites should have been chipped off predominantly metallic parent bodies rather than ones that, following differentiation, had a large mantle round their cores. Again, this turns out to be so. We can distinguish between the two candidate kinds of parent body by reference to their inferred cooling rates. These are incompatible with cooling in a core insulated by a thick mantle (Yang et al 2008). The parents must have been ‘much larger than previously inferred and cooled with little or no mantle’ (Yang et al 2007). Protoplanets the size of the Moon or larger were stripped of their mantle, and not by some gradual chipping-away process but in a catastrophic event that destroyed the bodies.

If the initial mass [of the asteroid belt] was ~103 times higher and many Moon-sized or larger protoplanets were present, collision rates would have been greatly enhanced while the differentiated bodies were still hot. As mantles are not efficiently stripped from cores by catastrophic impacts between asteroid-sized bodies, the IVA metallic body may have formed as a result of a grazing collision between protoplanets that disrupted the core of a Moon-sized body creating a string of metal-rich bodies.

The scenario of collisions leaving strings of metal-rich bodies is as elaborated by Asphaug et al., quoted at the beginning of this series. Colliding protoplanets do not simply merge. In some cases the result can be explosive, especially for the smaller body. As one author put it in the press release:

“As two massive objects pass near each other, gravitational forces induce dramatic physical changes – decompressing, melting, stripping material away, and even annihilating the smaller object” Williams says. “You can do a lot of physics and chemistry on objects in the Solar System without even touching them.”

A planet exerts enormous pressure on itself through self-gravity, but the gravitational pull of a larger object passing close by can cause that pressure to drop precipitously. The effects of this depressurization can be explosive, Williams says.

“It’s like uncorking the world’s most carbonated beverage” he says. “What happens when a planet gets decompressed by 50% is something we don’t understand very well at this stage, but it can shift the chemistry and physics all over the place, producing a complexity of materials that could very well account for the heterogeneity we see in meteorites.”

Once regarded as the stuff of fringe speculation, exploding planets have now entered the mainstream. To that extent, the main remaining difference of opinion – partly because the possibility has never been considered – is that creation theory ascribes the explosions not to collisions but to thermonuclear processes, owing to the speed of light having once been orders-of-magnitude higher than now. We can agree that asteroids tell us nothing about the origin of the solar system.

Next: Asteroids, comets and moons