Jellyfish bloom wipes out fish farm off the coast of Northern Ireland ran the newspaper headline on 22 November 2007. Billions of mauve stingers covering several square miles had penetrated the nets of the farm and killed more than 100,000 salmon. The sea was clogged with the tiny carnivores – for when jellyfish reproduce, they can do so prolifically and to devastating effect.

The tale of the Wisconsin jellyfish 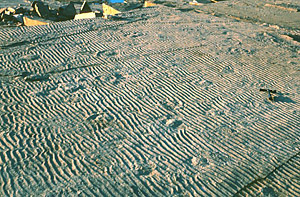 Having no hard parts, jellyfish fossilise only rarely, despite being prolific. Until recently, examples from the first half of the Phanerozoic were almost unknown. In 2002, however, James Hagadorn and colleagues reported a spectacular sequence of mass strandings at a quarry in central Wisconsin. The date was late Cambrian. Hundreds of medusa impressions were exposed on seven successive surfaces of rippled sandstone, close to the then sea.

The sequence of events relating to their burial at any particular horizon was reconstructed as follows. (1) Jellyfish were blown or swam into a shallow embayment. (2) As the tide ebbed, the jellyfish tried to escape by contracting their bells and forming convex depressions under their umbrella margins. Most were already dead or did not pulse. (3) The tide returned and sediment gathered round the carcasses, forming convex rims. (4) During the next ebb, rill marks formed in or near down-current parts of the rims. The carcasses desiccated, their guts collapsed, attracting mounds of sediment, and radial cracks formed in the centre. (5) The tide returned, depositing more sediment and burying some carcasses. Elsewhere, only the centre of the carcass was covered, with ripples of yet another orientation and amplitude. (6) After one or more tidal cycles, the entire carcass was covered. 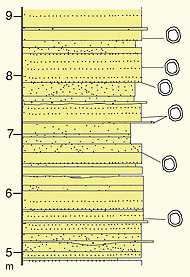 Perhaps the most significant point, apart from the rarity of the find, was that the jellyfish were distributed over seven successive levels. Only one other mass stranding is known from the fossil record, yet here, in one location and ranging over 3 metres’ depth of sediment, there were seven: a coincidence difficult to understand if the rate of sedimentation was centimetres per thousands of years, as the standard timescale normally demands. On that basis the fossils would represent the strandings of unrelated populations separated in time by millennia. However, the phenomena themselves suggest a single population buried in phases as currents drove it onshore. As deduced from the size and shape of the ripples, the currents were strong, prompting Hagadorn in a subsequent report to characterise the burying events as ‘storm surges’ rather than tides. The very preservation of these soft-bodied organisms showed they were buried rapidly, as did the lack of burrowing at these levels. A few cycles were enough to bury the creatures, and the whole sequence probably took a few weeks or months, rather than ‘up to 1 million years’.

Here again is evidence that the geological timescale exaggerates real time by orders of magnitude. Its assumption that rates of radioactive decay have always been constant does not square up.

The tale of the Utah jellyfish

The Cambrian – the earliest period in the Phanerozoic – is when no less than two-thirds of the animal phyla known to the fossil record burst on the scene. Three appear earlier, in the Proterozoic, nineteen in the Cambrian, six after the Cambrian and twelve have no fossil record (Meyer et al. 2003). Jellyfish, along with corals, anemones and hydrozoans, belong to the phylum Cnidaria. The sudden appearance of so many phyla is problematic. New phyla are supposed to be the result of species multiplying along the branches of a single tree and becoming progressively more unlike each other. Species will diverge into wider groups classified as genera, genera into families, families into orders, classes into orders, and eventually the differences will be so great that they will amount to distinct phyla. The fossil record should resemble an inverted pyramid, with a few similar species at the bottom and many divergent species at the top. That is not what one finds. 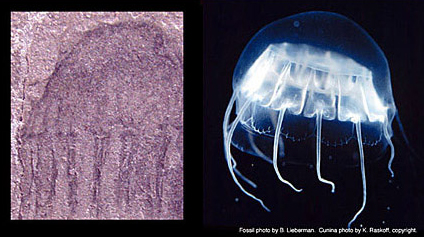 In 2007 came a report of excep- tionally preserved jellyfish from a Middle Cambrian site in Utah. The exciting thing about this occurrence was that they were well enough preserved to be identified down to class level – classes of jellyfish such as scyphozoans, cubozoans and hydrozoans. One hydrozoan was tentatively identified down to suborder or family level as a member of the Narcomedusae, jellyfish whose tentacles originate well above the bell margin. Contrary to expectations, not only were the boundaries that defined cnidarians as a phylum already drawn in the Cambrian but so were the boundaries that defined, within the group, certain classes and families. Indeed one was recognising, despite their antiquity, specifically modern classes and families. 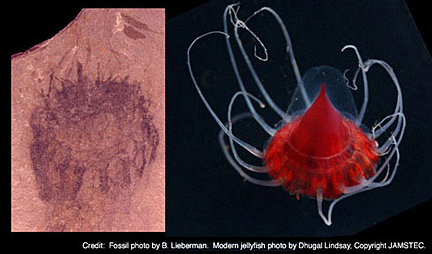 How could this be? According to our best efforts to reconstruct the order in which cnidarian families attained their distinctive forms, scyphozoans, cubozoans and Narcomedusae branched off relatively late in the history of the phylum. By contrast, the fossil record indicates that the greatest divergences took place very early, before cnidarians even hit the record, and very rapidly.

That is a pattern best interpreted as quantum, pre-programmed evolution, not slow, gradual, directionless change by innumerable little steps.