On occasions, a political leader may say something so embarrassing that his colleagues have to intervene and explain to the public that what he really meant was x rather than y. Many a commentator has felt a similar necessity to step in and interpret what, as regards creation, Genesis really meant to say. Genesis makes statements that conflict with scientific orthodoxy, and the incompatibility has been perceived as damaging. They cannot both be correct, yet both (it is thought) must be, so the account that seems more open to revision is subjected to interpretative adjustment. However, as in politics, so in theology. For the outsider is left thinking, “Stick to your principles or accept you are wrong!” Reconciliations which blur or nullify the details end up substituting a different account for the one being defended. If they solve the problem, they do so by breaking the rule that the text be understood on its own terms. It is the details that make the creation hypothesis falsifiable, and while our knowledge of the world should certainly be allowed to inform our understanding of the text, we should not be attempting to rewrite it.

Perhaps most embarrassing is the 6-day chronology – embarrassing because it confirms that the account really is speaking about creation and not some drawn out process of self-generation. The standard solution is to suggest that in Hebrew the word for ‘day’ has a broader range than its English equivalent, so that it could mean an indefinite period, even millions of years. However, the suggestion has no linguistic foundation. There are few if any occasions when English ‘day’ does not do the job, and in practice no translations take the point. It is difficult to see how they could. The text itself defines the word, just as it defines the words ‘heaven” and ‘earth’: ‘There was dusk and there was dawn, one day.’ To substitute ‘aeon’ instead of ‘day’ is to mangle what is explicitly stated.

Equally resistant to re-interpretation is the summary encapsulated in the fourth commandment: ‘For in six days Yahweh made heaven and earth, the sea, and all that is in them, and rested the seventh day.’ Here the Creator himself is speaking, and the whole force of the injunction to observe a day of rest depends on the six days being literally true. (Note 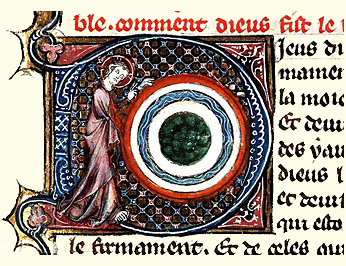 how he speaks here in the third person, as if referring to an account of creation which already existed in written form, which he was hereby corroborating.) The intended meaning must be the literal meaning.

Creation is by definition something that takes place ‘in the beginning’. It is the event that makes the story possible, and as such it has to happen in the beginning. If there is any question regarding length of time, it is not why God created the universe in as little as six days but why he did not do so in a single moment. (The answer is twofold: he thereby established the weekly pattern of six days’ work and one day’s rest, and he wished to reveal something of what was involved in bringing the world into being. Beginning with darkness, he brought light; beginning with disorder, he brought order.) The comment of a New Testament letter-writer is also germane: ‘the ages [‘aeons’ in Greek] were constituted by the word of God, so that the visible came into being from what could not be seen’. That is a profound statement, and implies that all history was immanent in that which came into being. History, including evolutionary history, followed creation and unfolded out of it. To suppose that acts of creation might have punctuated entire ages, even to the present day, would be to empty ‘creation’ of all meaning. The aeons of history came after the days of creation and were made possible by them. Evolution, in the sense of organisms undergoing anatomical change, or of planets undergoing geological change, could begin to happen only after the world was created. The ideas may be complementary, but they are not synonymous.

The conflict with scientific orthodoxy has also persuaded some to argue that Genesis tells us only why God created, not how. The truth is the reverse: Genesis tells us something about the how, almost nothing about the why: the only hint of an overall purpose is the emphatic statement that he made man to be like himself, and that he should fill the earth. With the exception of the sun and the moon we learn nothing about the purpose of particular entities. The how, however, is clear enough: God created by words of command. Reflecting on Genesis, Psalm 33 affirms,
By the word of Yahweh were the heavens made,
and all their host by the breath of his mouth.
For he spoke, and it came to be;
he commanded, and it stood forth.

The psalmist emphasises three most important points: creation was the work of the God of Israel, he did it by speaking, and the results were instantaneous. It is therefore untrue to say that Genesis is just a ‘theological statement about God as Creator’. Had it not been specific about what, when and how God created, we would have had little concept of him as Creator at all. The how defines what creation was. The world did not create itself. Life did not simply ’emerge’ from matter of its own accord. The heavens and the earth and everything in them came about supernaturally.

When the chronology is indefinitely extended, the Creation not only ceases to be an act, but ceases, in particular, to be a personal act. We lose sight of the fact that heaven and earth were made by a person, not an invisible force. The Creation was limited in time because it was accomplished with a purpose. An action that goes on forever and therefore never achieves its purpose is a contradiction in terms. A creation that goes on forever is a contradiction. It becomes impossible to match the Genesis account with the revelation that the apostle John gives us, that

God created by words of command, which he addressed to his firstborn son, through whom all things came into existence. The son worked with God. It was through him that God created.

So we also cannot get round this other embarrassing aspect of the Creation, that, directly and intimately, a deity with the attributes of a morally perfect human being was involved. One of the reasons why science, as a belief system, finds the concept of creation so embarrassing is precisely this personal aspect. Whereas the whole world manifests the divinity of the Creator, science seeks to restrict discussion, and perception, to what is impersonal. The pagan belief system attributed the creative power to ‘gods’, to creaturely likenesses of men and animals. The atheistic belief system takes this further, by attributing matter itself with creative power: heaven and earth, the sea, and all that is in them come into being of themselves.

In the creation account matter did not previously exist, and its coming into existence therefore had to be supernatural. The original matter produced no light: therefore God had to energise the heavens so that they gave light. Matter had no intrinsic tendency to organise itself into complex structure (for example, into plants and fruit trees), so God had to impart structure – and do it instantly, for to have done it over time would have implied that matter actively participated in the process. Organised matter was incapable of giving rise to life, so God had to create living souls (fish kinds, bird and insect kinds, every kind of terrestrial animal).