An example of what we see in the field: 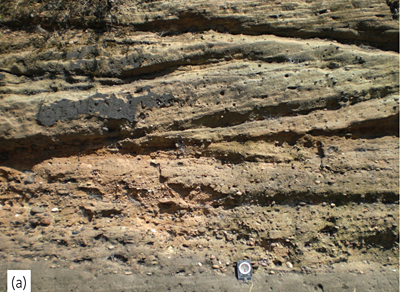 Quite ordinary, you might think (correctly). So why is what we see so puzzling?

It is reasonable to suppose that, like their modern counterparts, these half-metre-scale cross-bedded units accumulated rapidly, possibly in flash-floods lasting hours or days. Yet, the stacked, crossbedded units of the entire, 60 m-thick formation in the Nottingham area are thought to have taken as much as 10 Myr [10,000,000 years] to accumulate. 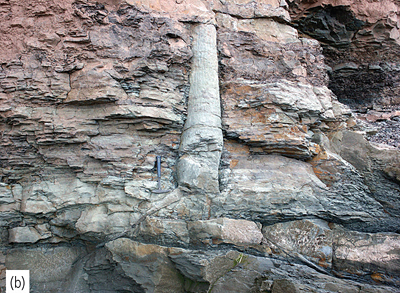 The trunks of tree ferns buried in their upright growth position are metres in height. The fact that their upright trunks were buried before they had time to decay indicates rates of sediment accumulation typically around 50 m/kyr [5 cm per year]. Yet, the net rates of accumulation of the thick Coal Measure sequences in which the buried trees occur are nearer 5 cm/kyr [0.05 mm per year].

An explanation for this or that phenomenon can seem very plausible and yet be wrong. A familiar example is the alternation of day and night: what explains the rising of the sun in the east and its setting in the west? Until the 17th century, most people thought the sun moved and the earth was stationary. They were wrong. Copernicus, Kepler and Galileo showed that appearances could be deceptive. The key lesson of the Scientific Revolution was that explanations had to be tested.

So it is with the age of the Earth. Whenever we measure the proportion of a radioactive element that has decayed into another element, the result – reported as an age – reinforces a timescale that stretches back, not merely millions, but billions of years. It all seems very consistent. In any thick continuous stack of sedimentary rocks, those lower down show progressively greater ages than those higher up, and the age of the oldest rocks on Earth gives us its minimum age: more than 4 billion years.

Nonetheless, it remains the case that the calculations producing multi-million-year ages assume that rates of radioactive decay in the past were no faster than those observed now. The assumption needs to be tested. The obvious test is to see whether rates of sedimentation in the distant past differed from those closer to the present. If the Earth is as old as the ages suggest, the rates should be similar. If the Earth is relatively young, they should seem much slower.

In 1981 Peter Sadler, University of California, published a paper entitled ‘Sediment accumulation rates and the completeness of stratigraphic sections’. It remains one of the most significant papers ever written. Having compiled nearly 25,000 rates of sediment accumulation, he found that rates tended systematically to decrease as the time encompassed by the measurements increased. As an example, the simplified graph below, from Robin Bailey’s article in Geology Today, shows the pattern for non-carbonate rocks deposited on continental shelves. Accumulation rates ranged across 4 orders of magnitude, from an average 20 cm per year for the immediate past down to 0.02 mm per year for successions spanning (purportedly) 100 million years. (An order of magnitude is the increase resulting from the power of ten.) 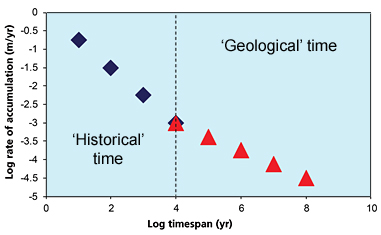 There may be valid reasons for this. The main agents of sedimentary transport and deposition are rivers. On timescales of hundreds or thousands of years a river can shift its course and thereby the place where sediment is discharged. Or climate can change, so that with less rainfall there is simply less erosion and deposition. Crucially, the rate of accumulation falls as the sediment becomes compacted and turns into solid rock.

On the other hand, further back in time geological processes will have been more vigorous, because radioactive elements, which produce heat, were more plentiful and the interior of the Earth hotter. New ocean crust formed more rapidly at mid-ocean spreading centres and old ocean crust was consumed more rapidly at subduction zones, increasing the rate of mountain and volcano formation and thereby the rate of the entire rock cycle. By and large, this would have cancelled out the effects of short-term fluctuations. Once sediment became consolidated (not necessarily a long process), the accumulation rate should have levelled off.

But perhaps it is more illuminating to consider the rates of limestone accumulation. Limestone is not a product of river deposition. It forms as calcium carbonate-secreting algae and animals sink to the seafloor. Here the main constraints on the rate of accumulation are the rate of carbonate ion (CO32–) entering the ocean and the maximum rate at which organisms can convert the ions into calcium carbonate shells. In the geological past the amount of CO2 pumped into the atmosphere and hence of carbon dissolved in the sea was much greater. Rates of accumulation overall should have been faster, not slower. 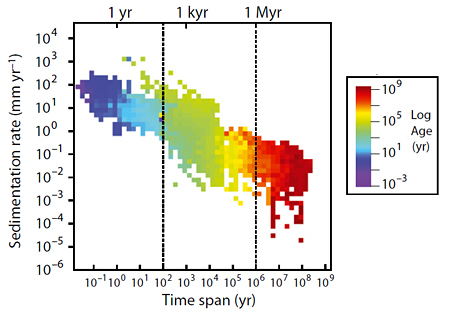 Geological rates are in line with the rate of chalk accumulation in the Cretaceous Period, dated 66–145 million years ago. With bed thicknesses averaging 40 cm and each bed assigned a period of 20,000 years, the rate is 0.02 (10-2) mm per year. We argue here that each bed represents an annual cycle of summer and winter and thus a sedimentation rate of 400 mm per year. Rates were faster because the carbonate-producing seas were warmer (promoting biological production) and levels of CO2 in the atmosphere some 4 times higher.
Scientific fundamentalism

Perhaps you believe that geologists determinedly seek the truth, wherever it leads: faced with such a massive contradiction between theory and observation they will at least consider the possibility that dating theory might be wrong – in the privacy of their journals if not in public. If so, there is something you too, dear reader, ought to face up to: geologists are human beings like the rest of us. At the highest level, geology is practised within a world-view that is fundamentally atheistic, and that world-view is sacrosanct. The possibility that the Earth might not be billions of years old is truly unthinkable. Neither Peter Sadler in his paper nor any other sedimentologist in academia since has ever questioned the validity of radioisotope dating. All know that if the age of the Earth were measured on the basis of modern-day sedimentation rates, it would come out at less than 1 million years and a natural explanation for the origin of life be impossible. ‘Evolution’ would cease to be the miracle-working god that can do anything, given enough time – and faith. So they believe that the sedimentary record is riddled with invisible gaps, increasing in number and duration the further back one goes, and ‘Evolution’ becomes a god of the gaps. The age of the Earth is a religious question. The religion is atheism, the heart’s hostility to God dressed up as reason, and anyone who questions the multi-billion-year timescale, whether or not on empirical grounds, is mocked as a religious fundamentalist.

Appearances can be deceptive, yes – but not often. In this case, ask yourself: is it the appearance of rocks such as the pebbly sandstones and fossils such as the buried tree that are being deceptive, or is it geological dating? The age of the Earth has to do with rates: the observed rate of radioactive decay now, as against observed rates of sedimentation now and apparent rates in the past. Dogma should be put to one side.