Geological dating systems date rocks on the assumption that radioactive elements provide a natural clock. The result is that years are measured in the millions to billions. The processes that actually produced the rocks suggest ages in the thousands or tens of thousands of years. It is this evidence, not assumptions of physics at one remove from the primary evidence, that should govern concepts of time. In practice, they do not. Questioning the radiometric dating system is taboo.

According to the direct evidence, rates of radioactive decay have been decreasing, and since there is less of a discrepancy with relatively recent rocks than ancient ones, appear to have been decreasing exponen-tially. Now, of course, radioisotope time and real time are the same, because we are measuring present radioactive rates and merely assuming that they have not been faster in the past. As it happens, there is evidence even from radioisotope systems themselves that the assumption needs investigating. 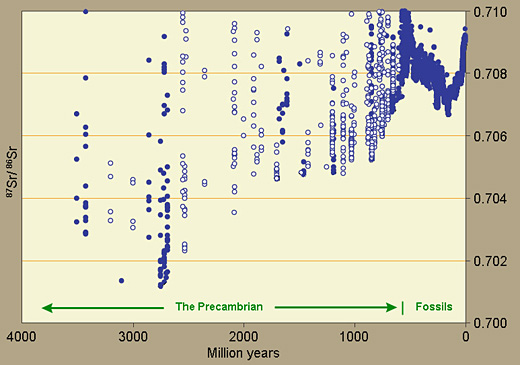 The argument is a little complicated, but only a little. The element rubidium occurs in two forms, one of which, rubidium-87, is radioactive and decays into strontium-87. Strontium is non-radioactive but has four forms (isotopes), one of which, that with 87 particles in its nucleus, is a product of radioactive decay.

A key ratio in geology is the proportion of strontium-87 to strontium-86. As rubidium has decayed, the ratio has increased over time, from a primitive mantle value around 0.700 to 0.709 – as good an example as any that radioactive decay in the record is a real phenomenon. But the trend is not uniform. Continental crust is enriched in strontium-87, and in seawater the degree of enrichment, the 87Sr/86Sr ratio, varies over time, depending on (i) the intensity of continental weathering, the soluble products of which are washed into the sea by rivers, and (ii) the flux of strontium at volcanically active ridges under the sea. Today, the ratio is the same whichever ocean is sampled, because the residence time of strontium (based on present rates) is more than 2 million years and the oceans should therefore be well mixed.

This figure being correct, the 87Sr/86Sr ratio should be constant across the globe whatever time horizon is sampled. The ideal result of sampling should be a narrowly defined curve that traces the fluctuation of the ratio only in response to globally changing rates of continental erosion and ocean floor generation. However, if the rate of radioactive decay has been decreasing, then the true age of the Earth is much younger, the residence time (based on radiometric ages) is much shorter, and the further back one goes, the less time there is for oceans to reach a state of being well mixed. In older periods we will get a range of values, depending on the rate of continental erosion in the geographical region sampled.

The graph shows the actual position: close to the present a very narrow range of values and a progressively wider range as the sampled rocks get older. Part of the reason for this may be that older rocks are more susceptible to later alteration. However, both in the field and in the lab strenuous efforts are made to select only the least altered rocks for sampling – otherwise there would be no point in publishing one’s findings – so this is unlikely to be the main reason. What the decreasing spread in values seems principally to be reflecting is a universal slowing down in rates of radioactive decay.