Certain issues tend to polarise opinion, particularly those at the heart of human existence such as whether there is a God, who he might be, and how the world came into being. Creationism and evolutionism offer scientific answers to these questions, and they are extreme in the sense that they are far removed from the answers one might deduce for oneself, free from the pressure to conform to what other people seem persuaded of.

Creationists hold that heaven and earth came into being supernaturally, as little as 6,000 years ago. Around 2500 BC there was a global flood that destroyed the world. Mountain systems rose and sea-levels fell, coastlines, mountains and valleys were carved by catastrophic processes of erosion, animals multiplied from single pairs and spread across the earth, vegetation recovered, human beings multiplied and spread across every continent, ice sheets spread across a large proportion of the northern hemisphere and retreated – all before the oldest cities of Mesopotamia, which historical records alone indicate must go back further than 2500 BC. It’s the chronology as much as the narrative that is extreme. 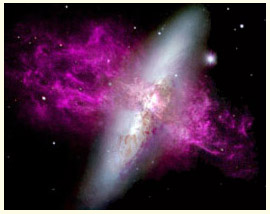 But if creationism seems out on a limb, what about evolutionism? Here we are invited to believe that the heavenly bodies formed themselves out of a mysterious ‘singularity’ 13.7 billion years ago; that the concentrations of matter we call galaxies were the result of ‘inhomogeneities’ in the mass of particles flying out in all directions, further and further away from each other; and that the solar system 9 billion years later condensed from a cloud of dust and gas. Equally difficult is the doctrine that life assembled itself out of chemicals, despite the experience of every human being that he has a soul, able to act freely and voluntarily. Can the wonders of the living world really be the handiwork of mindless matter?

Sometimes the truth itself lies somewhere in the middle. Sometimes the middle ground is the place of moral and intellectual compromise. Which is it here? Here are examples of areas where the truth lies between the two extremes.

According to creationism, most fossil-bearing strata were deposited in less than a year, during Noah’s Flood. Since many places lack any record, either because rocks were never deposited there or they were all eroded away, it is not possible to talk meaningfully about an average thickness. Nonetheless, in order to get some handle on rates of sedimentation, take the relatively thin 5,000-metre sequence in North Dakota from the Cambrian all the way up to the Palaeocene. Over 300 days a total of 5,000 metres corresponds to an average sedimentation rate of 16 metres per day, after compaction. During this time, rock types accumulated as diverse as deep-water shales, weathered carbonates, fossil soils, and salt and gypsum deposits (which dissolve in open water); sea-floors were successively colonised by crabs and marine worms (as shown by their burrows), adorned by sea-lilies, and smothered by oozes composed almost entirely of microscopic plankton; and vegetated surfaces were colonised by footprint-making dinosaurs and mammals. To make out that this is evidence of a global flood is extreme in the worst sense: a dogma imposed on and at odds with the evidence, not deduced from it. 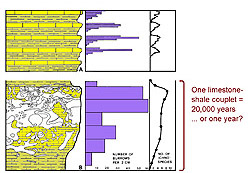 The majority view allocates 500 million years to the sequence. In practice, because of erosion and non-deposition, no geologist would divide 5,000 metres by 500 million years to arrive at a typical sedimentation rate. A shorter section is needed where it is reasonable to suppose that deposition was essentially continuous, such as Dakota’s chalk deposits. However, here we have to imagine rates of around 0.00007 mm per day after compaction. These too fail to do justice to the evidence, whether the evidence be exquisitely preserved fossils or laminae that burrowing animals, for lack of time, left undisturbed.

Surprising at it may seem, conventional science does not arrive at its chronology by looking at the primary evidence. The chronology rests on the decay of radioactive elements volcanic minerals. No attempt is made to test the dates in relation to the character of what is being dated.

The discussion How long is the Cretaceous? performs such a test. On the basis of the direct sedimentary evidence, it suggests that a more accurate rate of sedimentation for chalk deposits would be around 1.4 mm per day. In this respect recolonisation theory occupies the middle ground.

Evolution: yes and no

Creationism holds that all life can be traced back to the kinds that were created in the first week. Some allow for the possibility that one species might evolve into another, and a few even admit that the degree of change might have been quite large, as with members of the horse or cat families. However, horses and cats are seen evolving from the moment they first appear, towards the end of the fossil record, and their presence at this point cannot be reconciled with the end of a cataclysm that left the Earth a wasteland. The same is true of examples much earlier in the record. Evolution from one species to another was a continual phenomenon.

Evolutionism has the opposite problem. Instead of testing the theory that all organisms are inter-related, it simply assumes that they must be (the Earth, after all, is billions of years old) and then interprets everything accordingly. The evidence for some evolution having taken place – small-scale in the case of trilobites gaining an extra rib, large-scale in the case of snakes evolving from lizards – is taken as proof that all organisms are related to each other. Evidence to the contrary is smoothed over.

What is extreme here is not the argument that large-scale evolution happened, but that it happened universally and that it happened by chance. Organisms are governed by programs of such complexity in their coding that the theory of evolution by genetic error just does not meet the case. Indeed, the bigger and more rapid the transformation, the more difficult it is to explain.

The complexity of biological systems, in and of itself, is evidence for design. Information requires intelligence to produce it, and the information systems we find in all organisms, even bacteria, point to a supreme intelligence, way beyond the efforts of the best human minds to comprehend even collectively. Information systems that have the capacity to change over time – that control evolution even as they themselves evolve – require intelligence of an even higher order.

Recolonisation theory integrates the evidence by proposing that fossils trace the recovery of life from a disaster that almost completely destroyed it. The living world resists being ordered into a single tree, and there are no rules with regard to the extent of evolution characterising its many separate trees. Some organisms changed very little over time; others changed a great deal. Recolonisation provides the narrative within which the evidence can be interpreted case by case, without having to push it further than it will go.

However, there is one respect in which recolonisation theory is more extreme than either of the other positions. Creationism postulates a global Flood, but not so violent that animals could not survive the seas that deposited mile upon mile of sediment to leave footprints in layer after layer. Evolutionism, while it recognises asteroid impacts, mass extinctions, and occasionally catastrophic episodes of volcanism, postulates average sedimentation rates of the order of 0.0001 mm per day.

Recolonisation theory has a still more extreme scenario, where at the very beginning of geological history the planet was engulfed by water and pummelled by asteroids. In the course of a few weeks mammals, reptiles and everything inbetween perished, together with the land they lived on. Erupting lavas formed new land, while the old world sank into the molten interior. 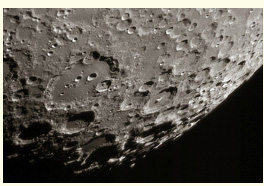 The facts on which this scenario is based are the same for everyone: intense bombardment of the inner solar system at the beginning of history by objects that left craters the size of continents, the absence of terrestrial rocks from this period, the ubiquity of water. What stops the academic community from coming to the same deduction are the very issues we have been discussing: the habit of interpreting all phenomena so as to conform to a timescale stretching over billions of years, and the assumption that all biological change must be part of a story whereby molecules self-assembled into man. Both these perspectives are open to question. Overcome these hurdles, and the scenario of a mass extinction event, recovery from which is the entire theme of Earth history, becomes obvious enough.

When it comes to interpreting Earth history, being a moderate is not an option.