The Archaean is the oldest time division of the extant crustal record. Radioisotope dating gives it an age of 3.9–2.5 billion years (Ga), spanning just over a third of Earth’s preserved history. The only remains of the surface older than 3.9 Ga are isolated crystals of the super-hard mineral zircon (ZrSiO4), which give ages of up to 4.4 Ga but occur in sandstones that are much younger. Thus the first 0.5 Ga of Earth history is missing from the primary rock record. Conventional geology struggles to know why, but if we suspend belief in the inflated timescale, it becomes possible to infer that the original land – inhabited by people and animals – was totally destroyed. The Hadean/Archaean boundary then equates to the time of the Flood-Cataclysm, and the Archaean itself to the first few thousand years immediately after the Cataclysm, at the start of which the planet was under water and new land began to form in place of the old.

Water before there was land

Rocks from the earliest Archaean are nearly all igneous: crust solidified from rising magma. Lava that contracted into pillow shapes as it came into contact with water indicates that the eruptions were submarine. As indicated also by the paucity of clastic sediments – products of weathering, erosion and tectonic upheavals – there was little land above sea-level. The general picture is of a world submerged, with here and there small volcanic islands protruding like ancient versions of Surtsey Island, rapidly shedding material from their sides. For a very brief period there may have been no dry land at all, just like the situation described in the Hebrew tradition: ‘The waters prevailed so mightily upon the earth that all the high mountains under the whole heaven were covered.’ With the old creation destroyed, terrestrial crust had to form anew, by massive underwater extrusions.

Where did the water come from?

According to the nebula hypothesis for the origin of the solar system, Earth should not have any oceans, since it is positioned a long way inside the ‘snow line’ (beyond Mars) where water in the nebula could have begun to exist as a liquid. How much water there was before 3.9 Ga is unclear, because of the absence of rocks, but we know there was some, and thereafter surface ocean abounded.

The continents were mostly flooded until the end of the Archaean. Only 2–3% of the Earth’s area consisted of emerged continental crust until about 2.5 Ga.

Since this water had to have come from somewhere, the most common suggestion is that it came from comets hitting the Earth after the proto-crust had solidified. This is a supposition rather than an explanation, however, since the origin of cometary water is itself a mystery in relation to the nebula hypothesis and the suggestion only displaces the problem.

A further difficulty is that the heat energy released by the bombardment at the end of the Hadean was sufficient to boil all surface oceans away. Although it has been calculated that most of the water would have remained in the atmosphere and eventually back, no marine life could have survived the onslaught. Yet, as discussed below, marine life is attested from 3.5 Ga and possibly from as early as 3.8 Ga. 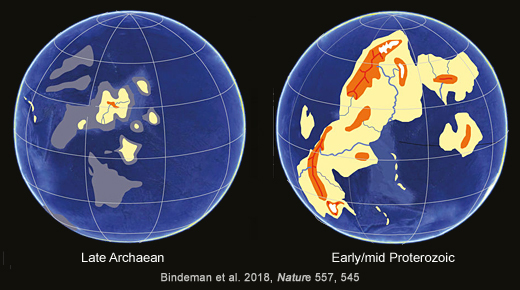 By itself, the scientific evidence seems insufficient to solve the mystery. Here the Hebrew tradition gives us important additional information. First, it indicates that the original Earth was two-layered, with a body of deep water lying underneath the land rather than encircling it – as has indeed been geologically inferred (Kamber et al. 2003). And second, it indicates that the cataclysm destroyed the architecture of this two-layered system. The pillars holding up the land collapsed, causing the great deep to burst through the land and submerge it; the ocean that was once underneath the land ended up on top.
Could anything have survived?
Oleg Abramov and Stephen Mojzsis addressed this question in a Nature article entitled ‘Microbial habitability of the Hadean Earth during the late heavy bombardment’. Basing their calculations on the assumption that the bombardment went on for 100 million years and that the total mass of the asteroids was 2 x 1017 tons (probably an over-estimate), they concluded that microbial life could have survived in zones within the crust. They also found that:

The impact energy would have been colossal, the equivalent of billions of hydrogen bombs. Most of it would have been absorbed by the thick layer of land, not the water beneath. In contrast to today’s continents, which are 1300° C at their base, this primeval layer would have been relatively cool. Undoubtedly the upper few kilometres would have melted, but as water engulfed the land, rapid quenching of the melt would have formed an insulating crust, just as, on a smaller scale, an insulating crust forms around pillow basalts. Further cooling would have taken place more slowly.

Thus, although the oceans would certainly have been hotter than now, marine life borne up in the erupting water might well have survived – animal life as well as microbes.

The first signs of life

Just how warm the oceans were is difficult to say. One indicator is the oxygen isotope composition of phosphates. The oldest such evidence comes from the 3.5–3.2 Ga-old Barberton greenstone belt of South Africa. Near-surface ocean temperatures were in the range 26–35° C, similar to temperatures now around the equator. Ocean-floor cherts indicate that deeper was warmer, in which case it would also have had to be denser, as a result of dissolved iron and other chemicals expelled from the mantle. Indeed the abundance of iron in seawater of this time bears witness to the intensity of seafloor spreading. Stripped of oxygen, saturated in metals, hot and acidic, subsurface waters were uninhabitable. The submerged, formerly terrestrial crust, melted and broken up by asteroid impacts, was in hydrothermal ferment. 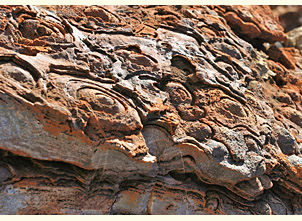 Other evidence of near-surface life from this time is preserved in the Strelley Pool Chert of Western Australia. Here we have a snapshot of environments all the way from the rocky shore to the volcaniclastic deposits of deep water. During ‘a rare pause in igneous and hydrothermal activity’ stromatolites – sedimentary mats and mounds produced by microbes – formed in the shallows, decreasing in abundance where the water deepened and higher in the succession where the increased salinity from evaporation made conditions intolerable. The hydrothermal activity was that of a molten blob of granite ascending through the craton margin and causing the shelf to dome up and fracture. Soon after the pause, lava up to 8 km thick flooded the region.

The microbial structures of the Strelley Pool Chert represent the oldest compelling evidence of an ecosystem anywhere. Microbial tubes in the rims of pillow lava from the Barberton are about the same age. Claims of still earlier evidence of life from Akilia, SW Greenland, where some of the world’s oldest rocks are found, tend to be controversial. According to one blunt assessment,

The rocks of Akilia provide no evidence that life existed at or before c. 3.82 Ga, or indeed before 3.67 Ga, or even that traces of life occur at all. The complexity of the rocks (mafic, ultramafic and tonalitic gneisses), multiple episodes of intrusion, intense deformation and high-grade metamorphism, and the absence of any unequivocal evidence that any of the rocks were deposited on the Earth’s surface, suggest that these rocks are wholly unsuitable for the discovery of primordial traces of life.

Stromatolites and organic carbon have been reported from Greenland dating back to 3.7 Ga. Putative microfossils within iron-rich sedimentary rocks in Quebec date back to at least 3.77 Ga. Soon after the bombardment, and close to impact sites, conditions would have been barely suitable for the establishment of life or its preservation. Conditions would remain extreme for some time.

Next: New land in the Archaean.