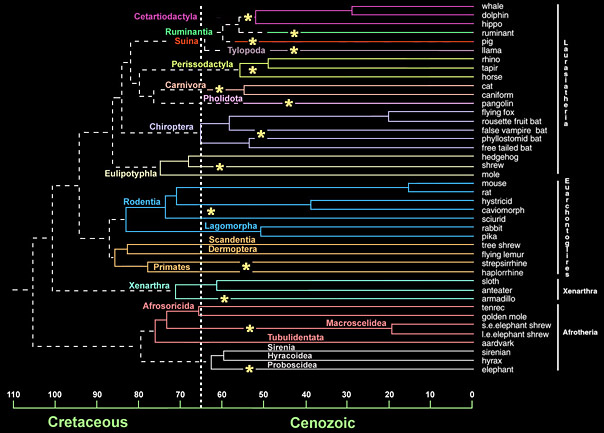 [Click on image for higher resolution.] The appearance of modern mammals is explosive. Evolution theory assumes that all mammals are related to each other, but determining the relationships between one order and another has proved difficult. A few fossils go back as far as the Cretaceous but are of too general a character, or too poorly preserved, to be linked to any modern form; most orders appear in the Early Eocene (in radioisotope chronology 55 million years ago).

The image here is a redrawn version of figure 2 from the genetics-based study of M. S. Springer et al. (PNAS 100:1056-61, 2003), summarising the relationships between placental mammals. Each line represents an evolutionary lineage of new species originating and old ones becoming extinct, generally in a direction of increasing specialisation. In the original diagram all lines are solid; here the most doubtful connections are marked as dashed lines. Order names are shown in colour, with the names of living representatives listed in white. Stars mark the earliest fossil occurrences.

Evolutionary trees based on molecular studies (genomes of living mammals) differ from those based on morphology (fossils). It is impossible to know which approach is more reliable. In principle, the two should be in agreement.

The diagram does not include marsupials, nor the many Mesozoic mammal orders, none of which survived beyond the Eocene or appear to have given rise to the modern orders. A discussion of the evidence for mammals having evolved from reptiles may be found here.