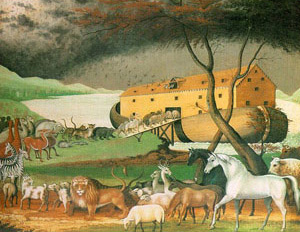 Plants and animals have existed on Earth from the beginning. Over time they have increased in species diversity, so that what we see now is their final forms, not the forms as originally created. Illustrations of Noah’s Ark, which invariably show modern-looking animals, give the impression that the Deluge and before that the Creation were geologically recent events, and that no evolution in the sense of diversification has taken place between then and now. Are such illustrations therefore anachronistic?

Few kinds are mentioned in Genesis with any particularity. The creation account refers to broad groups of animals, such as winged creatures, domestic beasts (incorrectly translated ‘cattle’ in most versions) and animals of the earth. They are categorised according to whether they move in the sea, in the air, in the earth or on it. Livestock, miqneh, are first mentioned in connection with Jabal, the first man to keep livestock as a bedouin, and cattle, baqar, are first mentioned in connection with Abraham (12:16). The only terms that suggest specific kinds are (in translation) snake (3:1) and – at the end of the antediluvian period – olive, raven and dove (8:7-11). Nonetheless, they do pose a problem. Modern-day snakes evolved from lizards, sheep evolved from a group that include goats, deer and cattle, and ravens evolved from the same ancestors as sparrows and birds-of-paradise. Is the problem one of language, or do we have to examine assumptions at a much deeper level?

Consider the ‘sheep’, tso’n, kept by Abel. Actually the word means ‘flock’, a group of sheep or goats. Hebrew had other words specifically for sheep or goats. Did the flock consist of one kind of animal or two, and how similar were they to the animals known to the author of Genesis, near the end of evolutionary history? Just like species, languages change over time. The original animal or animals might have been quite different from those known today. Sheep are closely related to goats, and since they are now distinct, English has a word for each; there is no vernacular word that lumps them together.

Several types of evidence can help determine the extent to which living animals might be related to each other: cross-breeding experiments, similarities in trait or character, and molecular analyses (analyses of proteins and DNA). On these grounds it is clear that the genus sheep (Ovis), comprising at least eight species, is related to the genus goat (Capra), comprising nine species. Capra, in turn, is related to numerous other genera, such as Barbary sheep, various goat-antelopes and the Tibetan antelope. Character similarities and molecular analysis then support the further step of grouping all sheep, goats and goat-antelopes with true antelopes, the Antilopinae. Hence, further back in time – around the end of the Oligocene, according to the fossils – there were no sheep, goats or antelope as such, only more generalised animals that would later diversify into sheep, goats and antelope. The Oligocene was long before man appeared in the fossil record and, a fortiori, long before the earliest evidence of animal domestication. 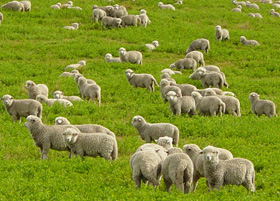 So where did caprines and antelopes come from? The answer seems to be a still more general animal: a sort of sheep-goat-antelope-cow. For if we trace back the ancestry of domestic cattle, buffalo and bison, we must conclude that they too are interrelated, forming a group parallel to the Antilopinae called the Bovinae, and since the Bovinae are more similar to the Antilopinae than to any other group, there is a case for linking these together in a group called the Bovidae. Could these have been the animals kept by Abel? Linguistically it’s just possible. The term tso’n could be that wide and still be narrower than the term miqneh, given that the latter comprises all manner of livestock, including asses and camels, which are unlike each other and both classified outside the Bovidae.

Intuitively we might feel that caprines and bovines differ so much that they are unlikely to be related. Only one morphological trait unambiguously defines the Bovidae: their non-deciduous, unbranching horns and keratinous horn sheaths. Molecular evidence is also somewhat unclear. However, Antilopinae and Bovinae have numerous points of similarity. It’s just that the traits they have in common besides a particular type of horn are not exclusive to them.

Often in such cases important clues come from species that, whether in microbiology, morphology, or both, straddle more than one group. One example is the saola (Pseudoryx) which was unknown to science until its formal description in 1993. While skeletal and dental characters ally the saola with Antilopinae, genetic studies put it among Bovinae. In the end, the DNA evidence was held to be decisive. The point is that the difficulty of determining which group the saola fell into suggests that Antilopinae and Bovinae are not separate kinds, but related to each other.

Even this is unlikely to be the final frontier. Bovidae are one of six families that cluster to form a group called the Ruminantia, namely:

What primarily distinguishes the ruminants is their digestive system, in which hard-to-digest food such as grass and leaves is passed through a series of four stomach chambers. Their teeth are also characteristic. The most primitive (least evolved) of the six groups are the Tragulidae; the others are all roughly on a par, implying that they diverged from their ancestral stock about the same time.

Since the four-chambered stomach is a highly specific feature unique to ruminants, and the ruminants, so-defined, have other characters linking them as a group, it may be that they too are interrelated. This is supported both by DNA studies and by (not fully documented) cases of hybridisations between the cervid and bovid families: for example, the roe deer crossing with the sheep, and the moose with domestic cattle.

At present, the Ruminantia mark the limit of what can safely be taken to have constituted the genome of the original kind. Support for the integrity of the next level – the Artiodactyla, mammals with even-toed hooves – is weak (Gatesy et al. 2002, Chen et al. 2019). The morphological and molecular data are in conflict, and it remains to be seen whether, with further research, a good case can be made for linking the Ruminantia with the Suina (pigs), hippopotamids and camelids so as to corroborate the hypothesised group. Even-toed hooves could be a ‘convergence’ – a similarity that has no evolutionary significance. The much more specific and complex feature of the multi-chambered stomach could also be a convergence, for, at the molecular level, camels (with three chambers) and ruminants (with four) 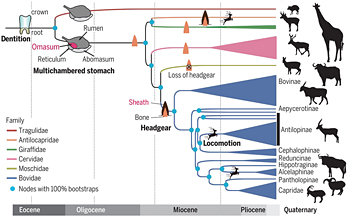 are less similar to each other than either group is to hippos, which do not have multi-chambered stomachs. As always, judgements need to be made in the light of all relevant evidence, and there are no hard and fast rules: morphological discontinuities are not necessarily evidence of phylogenetic discontinuity, and shared characters are not necessarily evidence of relationship. Intuition about what may or may not be related is also not a good guide.

The idea that cows might be related to sheep, or bison to giraffes, is of course unsettling from a creationist point of view. The blood circulation system of the giraffe, perhaps the most iconic of Noah’s Ark animals, appears so perfectly designed for the strains imposed by its long neck that, one might suppose, it had to have been created that way. ‘Giraffes have always had long necks, and they have always been giraffes,’ the CMI website maintains. Although few believe that the form of created kinds was completely fixed, there is a strong reluctance to concede evolvability, and if the creature seems particularly remarkable, fixity will be defended. The creationist, after all, is approaching the question from the opposite end: whereas Darwinism sees all species as related, the creation-evolution antithesis demands a contrary view equally absolute. The short-necked from the earliest Miocene,Climacoceras, is nonetheless an early giraffid, and is followed by other giraffids. Only later did the family split into okapis and something like the long-necked modern giraffe.

However, the real issue is not so much the degree of evolution as the mechanism: whether the evolution suggests something accidental or a path whose unfolding route was pre-planned. Here it is the Darwinist who should have cause to feel uneasy, for the pattern is not one of slow, continuous change from one form to another. The changes are abrupt, the extent of the change – where sheep, bison, deer and giraffes all arise from the same stock – enormous. While fossilisation may have been a rare and chance occurrence, there is nothing to support the idea that evolutionary change was the result of miniscule, slowly aggregating, fortuitously beneficial mutations. On the one hand, the continuity is sufficient to justify the inference of relationship; on the other, the discontinuities throw doubt on the presumption that chance processes were at work. We know that ontogeny is biologically programmed, the process whereby an individual evolves from a single fertilised cell all the way to adulthood and old age. The more scientific presumption is that phylogenetic evolution is also so controlled.

DNA programs are so complex that the emergence of new traits and structures can hardly be accounted for otherwise. It is also what the fossil record suggests. The appearance of the Bovidae in the Miocene was ‘geologically near-instantaneous’, for at that point the group was already species-diverse. The lineages split rapidly, showing ‘a rapid radiation that is unparalleled in other mammals of large body size’ (Gatesy et al. 1992). Often the same novelty arose independently in different lineages. Morphological traits ‘evolved several times resulting in various parallelisms and convergences that obscure true relationships’ (Fernandez & Vrba 2005). The nature of the evolutionary process suggests orchestration from the outset.

Prior to the Ruminantia, the trail grows cold. It is clear, nonetheless, that the further back in time we go, the further we leave sheep-, goat- or even deer-like animals behind. The identity of Abel’s animals cannot be determined by simply tracing the genealogy of modern species back in time, even though a pair of animals that descended from them must have been on the ark. If forms denoted by words such as ‘raven’ and ‘dove’ (or ‘olive’ and ‘vineyard’ with regard to plants) bear any correspondence to forms familiar to us in the living world, it must be because, evolutionarily, we have arrived at the same point. The antediluvian world was a created world; it came down from God out of heaven. But it perished. In the Cataclysm the creation was abrogated. Although seeded from created forms, the post-diluvian world did not come instantaneously into existence. Noah and his family stepped onto a landscape of chaos, denuded of soil and vegetation. Most of the land was under water. The only mountains were the rims of impact craters, the biggest of which were soon to be flooded with lava. Earth had to begin anew. The regeneration of marine habitats and marine life, of terrestrial habitats and terrestrial life, stage by pre-ordained stage, had to be a natural process. Had we but eyes to see, we would understand that the arrival of the world at its present, final state, hosting millions of species of plants and animals, teeming with life in every corner, was no less miraculous than the Creation itself. It’s as if God were showing that he is no less capable of producing sheep by a long pathway of evolutionary steps than he is of creating sheep in an instant.