Skip to content
Asteroids are concentrated in two main regions: a wide belt between the orbits of Mars and Jupiter, and the orbit of Jupiter itself, where asteroids called Trojans have drifted into synchrony with Jupiter’s motion. Some – including 900 over 1 km across – float about between Mars and Earth. Could they be the remains of a former planet? Models of the early solar system suggest that the main asteroid belt contains no more than 0.5% of the material initially present, and there was certainly room. The vacancy extends across a radial distance more than twice that between Mars and the Sun. The distance between Mars and the Sun represents a much smaller area, yet accommodates four terrestrial planets. In the region between Mars, the outermost terrestrial, and Jupiter, the innermost gaseous planet, there could have been at least that number.

Another vacancy lies between Uranus and Neptune. Distances in the solar system are measured in astronomical units or AU, one unit being the mean distance between the Sun and the Earth. The orbits of Uranus and Neptune are 11 AU apart, twice the entire distance between the Sun and Jupiter. With Uranus’s axis tilted 98 degrees it certainly seems as if something catastrophic occurred in this region.

All but one of the planets orbit within 3.5° of a single plane, the plane of the ecliptic. The exception is Mercury, with an inclination of 7°. Its orbit is also the least circular. Asteroids tend to orbit at a much more inclined angle, the majority within 20° of the plane, a few up to 40°. In the nebula hypothesis, the 3-dimensional cloud collapses into a planar disc and the planetary bodies accreting out of it settle close to the plane. In the design hypothesis, the planets were created and their original orbits would have been exactly on the same plane (any randomness would imply, misleadingly, a physical cause for the randomness). In either scenario, any significant deviation from the plane implies a measure of disturbance. The asteroids were disturbed by collisions. Repeated jostling within the belt resulted in cycles of break-up and re-aggregation that continue to this day. Impact scars are common even on quite small asteroids. Earlier, impacts also battered the planets, even Mercury, the planet closest to the Sun. The Moon is covered in craters, the largest of them 2500 km across.

Fragments from the explosions shot out in all directions. Those that shot out in roughly the same direction as the orbit of a former planet would have remained at that distance. Fragments that shot out in other directions would (i) sooner or later have crashed into the Sun or other planets, (ii) been captured by other planets to become their satellites, or (iii) have attained solar orbits of their own.

Much of the material inferred to be missing from the asteroid belt was swallowed up by Jupiter, immediately adjacent, which thereby acquired a core – equal, it is estimated, to about 16 Earths. The Trojan asteroids and the rocky moons of Jupiter and Saturn all have similar optical colours and may likewise have originated from one or more explosions between Mars and Jupiter. At the other extreme are the constituents of the Sun itself. Initially the Sun would have consisted solely of hydrogen. Its helium is the product of nuclear fusion. Most of its other elements exist in chondrite-like proportions, as a result of planetary debris having plunged into it. Taking into account all the out-of-place rocky material in the solar system, it becomes apparent that only a tiny fraction of the original planet (or planets) remains in the asteroid belt. 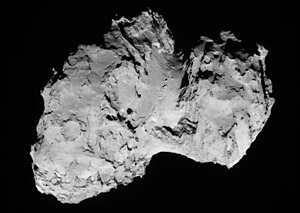 As with every other class of solar system body, ideas about comets have changed over recent years. Once assumed to be unaltered leftovers of the cold outer nebula, they have proved to be compositionally much the same as asteroids, only richer in volatiles (ices). We know most about the short-period variety, those with orbits of less than 200 years. Some consist primarily of volatiles; some have solid nuclei, dented by craters; others are low-density rubble piles. The volatile-rich manifest themselves as comets when their elliptical orbits bring them close to the Sun. Each year several asteroids are reclassified as comets on being found to exhibit a coma and/or tail. Most short-period comets orbit between Mars and Jupiter, having been drawn into the inner solar system, it is supposed, from the Kuiper Belt.

The data sent back by the Deep Impact and Stardust missions, investigating Tempel 1 and Wild 2 respectively, were revelatory. Contrary to the expectation that the silicate particles amidst the ices would be amorphous, like the dust in interstellar space, the silicates turned out to be crystalline, indicating melting at temperatures up to 1000° C. Analysis of one such silicate in Wild 2 indicated a cooling rate within the range 10–100° C per hour, in close agreement with the cooling rates of chondrules or asteroidal lava (Leroux et al. 2008). Carbonates, iron, CAIs and chondrules were also detected.

How is one to explain the existence of high-temperature materials and low-temperature materials in the selfsame body? Since the refractory core must have preceded the volatiles round the core, it is the core that plays the decisive role in solving the problem, and its rocky composition suggests an origin in the inner solar system. Like asteroids, short-period comets seem to have originated as fragments of terrestrial planets, mixing with with water vapour as they sped out.

‘Long-period’ comets are those with elliptical orbits that take more than 200 years to complete, extending far beyond the observable solar system. They too are not fundamentally different from asteroids in composition. Their life-times are long in comparison to short-period comets but short in comparison to the presumed age of the solar system. They can orbit the Sun at any inclination and are as likely to have a retrograde orbit as a prograde one. These characteristics have prompted the hypothesis that the solar system is enclosed by a vast replenishing ‘cloud’ of such comets, known as the ‘Oort Cloud’, at a distance too great to permit the hypothesis to be corroborated.

Whatever the reality of the cloud, the difference in orbital period between the two types is not absolute. Long-period comets can become short-period if the gravity of the giant planets pulls them into the inner solar system – pulls them back into the inner solar system. Centaurs, little known half-comet, half-asteroid objects between Neptune and Jupiter, may be related to the long-period comets. They are of particular interest because their orbits are strongly chaotic, varying markedly on timescales of only thousands of years. The Oort Cloud may be the remains of exploded rocky planets beyond the present Kuiper Belt. 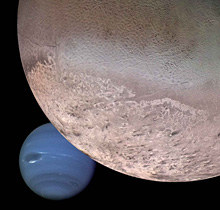 Except for the Earth’s moon, none of the planetary satellites are likely to have formed in situ. Mercury and Venus have no satellites. Mars has 2, both clearly asteroids. Jupiter has around 69 and Saturn at least 61, the majority less than 10 km in diameter. Uranus has 27, Neptune 13. The number decreases with distance from the main asteroid belt. They are likely to be either expelled main belt asteroids or expelled Trans-Neptunian Objects. Once captured, the different types frequently crashed into each other. Some collisions resulted in complete fragmentation. Occasionally the fragments re-assembled to form new moons. Other collisions merely left the moons cratered and scarred. Spherical shape is not evidence of a particular origin, since above a certain mass self-gravity will naturally pull a body into a sphere.

Irregular moons mostly have a retrograde motion because elliptical orbits are more stable when retrograde. However, Saturn’s irregulars, which also have elliptical orbits, include a high proportion of prograde satellites. It is possible to model the capture of both types (Astakhov et al. 2003). Size is very variable. At 2700 km diameter, Triton is by far the biggest of Neptune’s satellites, has an inclined but circular orbit, and lies between a group of inner prograde satellites and several exterior satellites with both prograde and retrograde orbits. Density calculations suggest it consists 30–45% of water ice and 55–70% of rocky material.

The present solar system offers no mechanism by which moons could be captured, so the thinking is that captures must have taken place early in its history, when there was a much greater likelihood of collisions and near misses (Jewitt et al. 2006).

Next: Water in the heavens