In the beginning God created the heavens and the earth – the whole universe. This familiar statement is not primarily a summary of what is about to be narrated, but of what God did first. Since in the next verse the Earth already exists, the opening verse must be referring to the Earth’s creation, along with the heavens. ‘Heavens’ (or ‘heaven’: the Hebrew does not distinguish between singular and plural) designates both matter and space – hence the later reference to ‘the heavens and all their host’, the host being in the heavens. Matter and space were created as one, implying perhaps that space is not an absolute void, defined by the absence of matter. Finally, we may note that the creation of the heavens took place before anything else. It was creation ex nihilo, in the sense that nothing pre-existed; the visible proceeded out of the invisible, out of God himself.

Among the most fundamental laws in science are the first and second laws of thermodynamics – thermodynamics being about how energy passes from one system or state to another. Fortunately these laws are easily expressed in words.

The first, the law of conservation, states that energy, or matter (which is a form of energy), can neither be created nor destroyed. The total energy of the universe will always be the same, whatever physical or chemical processes take place within it. The first law implies that the creative act that brought it into existence was an act done once for all. The act has a purpose, and matter would exist so long as the purpose remained to be fulfilled. Matter would not be added to, at later moments, by further acts of creation.

The second law says that the amount of thermal energy available for work in a system can never increase. Heat always flows from hot to cold; flow in the other direction does not and cannot occur. In effect, the law encapsulates the condition which allows anything to happen. In radiating light, the sun converts nuclear energy into electromagnetic energy, radiated out as photons. All objects radiate energy. As a consequence their entropy increases. Every physical and chemical process results in a net increase of entropy, including biological processes. Were it not for an organism’s temporary ability to utilise energy from its surroundings, life would be impossible. Thus the law points necessarily and unequivocally back to a state at the beginning when contrasts between hot and cold were at a maximum and entropy at a minimum.

The second law can also be conceived as saying that the level of disorder in a closed system cannot increase. Organised systems become progressively less ordered over time, never the reverse. A house will rot and eventually collapse; a highly ordered molecule such as DNA or haemoglobin will break down. This is because thermal energy (heat) comes from the incessant motion of atoms, and over time the colliding atoms break down the segregations and partitions that make for order, reducing a system to a state of homogeneity. Although now expressed in terms of order and disorder, the second law is still the cause of an increase in entropy, and the entropy is still irreversible. The arrow of time goes only in one direction. Thus the law again shows that the universe must have originated in a moment when order was at a maximum – a state of zero entropy brought about by an order-originating Creator. 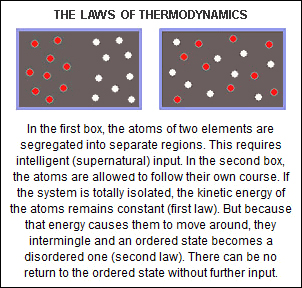 The first law derives from the permanence of the creation, and from its having been brought into existence once for all; the second derives from its impermanence, its evolving and temporally finite nature. Left to itself, the universe will run down. It was not designed to go on forever.

We cannot therefore argue that matter has always existed and has been organising itself in one corner of the universe into ever more complex, ordered states called ‘life’. A bacterium is a vastly more complex ordering of matter than any non-biological system. To postulate bacteria self-assembling without supernatural input is to imagine a massive violation of the second law – to postulate precisely the miracle-working supernatural agency that one wishes to avoid. The universe is perpetually descending from a state of higher order to a state of lower order. The beginning must have been when order was at a maximum, and this maximum order must have been imparted from outside the material universe. Any account of how the world began that does not recognise this is simply failing to observe the most fundamental laws of physics. People have to believe that, in the past if not now, nature miraculously overruled itself.

The universe therefore points back to a supernatural agent who once exercised power over matter. It has an inherently created character. If matter had always existed, that agent would have been unable to exercise power over it – not the power that forms ‘without human hand’ and in a mother’s womb unites flesh and spirit into a living soul. Nor could we now say that ‘he sustains all things by the word of his power’. Creation was an act of self-alienation, whereby the thing created ceased to be part of the Creator. He sustains the world because, ultimately, it still belongs to him. Although alienated from him, matter is still of him, and this is true of all existence, spirit and matter. He fills heaven and earth. ‘In him we live and move and have our being.’ He knows the end from the beginning, and in the end, therefore, his purpose for the creation will be fulfilled.

Notwithstanding subsequent attempts to qualify its absolute determinism, the modern view is that famously expressed in 1814 by the astronomer mathematician Pierre-Simon Laplace,

We may regard the present state of the universe as the effect of its past and the cause of its future. An intellect which at a certain moment would know all forces that set nature in motion, and all positions of all items of which nature is composed, if this intellect were also vast enough to submit these data to analysis, would embrace in a single formula the movements of the greatest bodies of the universe and those of the tiniest atom; for such an intellect nothing would be uncertain and the future just like the past would be present before its eyes.

In Laplace’s view everything in the world had a physical cause and there could be no room for free will. (If anything in the universe had free will, or if there was an element of randomness or unknowability in the behaviour of atoms, such an intellect would not have been able to see both past and future: any animal with free will would have disrupted the predictability of nature. Yet, was not Laplace, in the very act of reasoning, presuming that human intellects were in fact independent of and superior to the merely physical?) But the truth is not so much that time is part of the creation and God lives outside it, knowing it as something external to himself, as that space-time issued from him. He is immanent as well as transcendent. He created the ages. He ‘inhabits eternity’. Although, once created, time has no end and will go on infinitely unless it is brought to an end, space is finite. The universe is bounded, as anything created must be bounded. The Creator is greater than that which he has made.