Skip to content
There is more than one explanation of the history of life, so how do we distinguish between them? The flowchart highlights two key questions 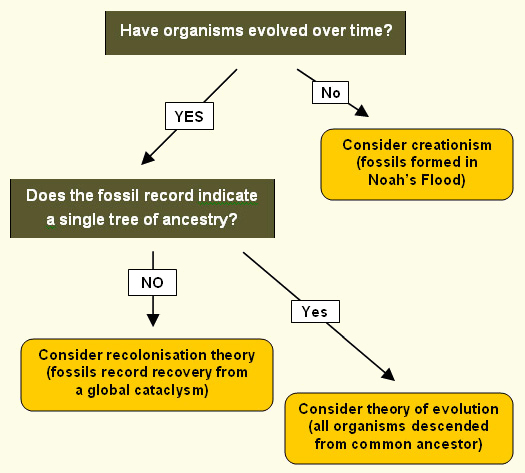 The factually correct answers are in block capitals: organisms have evolved, but their branches do not rise up from the stem of a single tree. When marine and terrestrial animals first appear in the fossil record, they do so explosively, not incrementally. Evolution in the sense of biological change is not the same as descent from a common ancestor. As environments became more various and colonising organisms adapted to them, some body plans underwent radical transformation: for example, from a land-dwelling reptile into an ocean-dwelling ichthyosaur or a land-dwelling mammal into a tree-dwelling bat. Others underwent relatively minor variation. In neither case can it be inferred that natural selection was the agent responsible, or that the millions of species making up today’s manifold forms of life had their origin in a soup of chemicals.

The strength of a theory can only be assessed against alternatives. In this instance the alternative to Darwinism is the possibility that organisms were created with evolutionary potential, whether for enormous change or only minor change: the possibility that the fossil record shows progressive recolonisation, as life recovered from a global cataclysm and evolution proved an essential process in that recovery. The alternative is not considered in the literature because it has never been formulated. It has never been formulated because the crucial evidence of a primeval cataclysm has emerged only recently (since the 1970s) and because the idea that nature could create itself has chimed with the atheistic spirit of the age. Whether in churches or in universities, few people are interested in reconciling the historical revelation of God with what we can know about him from the remoter past. But God is not remote.

Taking account of the latest research, this website explores the possibility that creation followed by destruction and recolonisation provides a more satisfactory explanation of the world.