Skip to content
The opening chapters of Genesis give a historical account of the origin of the world. They do not amount to a scientific theory (though they contain the kernel of one), and whether they should be classed as myth or not depends on whether they are true. That question has become increasingly complicated over the last two hundred years. Today the dominant world-view is Darwinian evolutionism, a science-based account which has supplanted the Genesis narrative and wields all the authority of an explanation that man has worked out for himself. Historical tradition plays no role. In reaction against this revolution, biblical creationism attempts to give a scientific account that upholds the Genesis narrative.
Evolutionism is the doctrine that the universe had a natural origin, that natural causes eventually gave rise to the earliest form of life, and that all subsequent organisms descended from that first simple organism. The beginning of all things is dated to about 13 billion years ago and the Earth’s origin to about 4.5 billion years ago. From their different perspectives, modern cosmology, biology and geology have all contributed to the story. The term Darwinian refers to the fact that at least some of the biological foundations of this framework were laid down by Charles Darwin.
The ‘ism’ at the end of the word denotes a belief system. Evolutionism is not just the acceptance of the fact that organisms have changed over time and new species have arisen from old. Rather, it interprets the process of species diversification as evidence that all diversity goes back to a single species, and that species as they evolved were continually upgrading their biological programs. The interpretation (a) rests on the evidence that species multiplied, (b) proposes a mechanism for the multiplicity (natural selection of chance variation), and then (c) links all organisms, from the simplest to the most complex, into a genealogical continuum of numerous, successive, slight modifications.
Indeed evolutionism is more than a belief system; it is, as the philosopher Michael Ruse has pointed out, a secular religion. It give an alternative explanation of how the world came into existence, it opposes other religious systems, it invites its followers to believe that man can, and indeed has, become a moral and righteous being over time without God. In an essay entitled ‘Is science a religion?’ Richard Dawkins wrote: ‘All the great religions have a place for awe, for ecstatic transport at the wonder and beauty of creation. And it’s actually this feeling of spine-shivering, breath-catching awe – almost worship – … that modern science can provide.’ The absence of the supernatural from its understanding of the universe and life in no way diminishes the awe. ‘Quite the contrary. ‘The merest glance through a microscope at the brain of an ant or through a telescope at a long-ago galaxy of a billion worlds is enough to render poky and parochial the very psalms of praise.’ That the world does evoke awe is testimony to the fact that it strains the notion that it might have arisen all by itself. Despite what evolutionism insists is the truth, we can’t but sense that we are looking at the handiwork of a Creator far more intelligent and imaginative even than ourselves, the observers who have the capacity to feel awe.
Creationism is the doctrine that the universe came into existence through the will of a supreme being who was, and is, outside time and space, that he made land and sea and everything in them in six days, and that he subsequently destroyed them in a global flood. The beginning of the universe is dated to less than 10,000 years ago, maybe even 6,000 years ago. The term biblical refers to the fact that believers take the book of Genesis as their starting point rather than the Origin of Species, and they base their date of less than 10,000 years on the Genesis genealogies, assumed to record the number of years between Adam and Abraham without abridgement. As an apologetic movement, creationism goes back to the Scriptural geologists of the 19th century, but it was following the publication in 1961 of The Genesis Flood by John Whitcomb and Henry Morris that it made an appreciable mark on the intellectual landscape.
Like evolutionism, creationism is a belief system. One can conclude that organisms came into being by creation without believing that they were created in their present form, or that the universe came into existence only 6-10,000 years ago and looked then much as it does now. 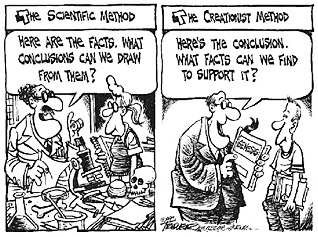 Evolutionism and creationism are embroiled in a propaganda war. Champions of Darwinism claim that evolution is a fact and dismiss creationism as religion masquerading as science. Champions of creationism claim that Darwinism is a pseudo-religion: if one interprets the facts in accordance with the Bible, it becomes clear that God made the world and Noah’s Flood produced its fossils. In their sense of conviction and unwillingness to look for common ground, each side resembles the other. It is not only creationists who start from a fixed position and then look for facts to support it.
What, then, makes a theory scientific? Reliance on data gathered by scientific methods? The investigation and explanation of physical processes in terms of cause and effect? We don’t have to produce a definitive answer, but one characteristic a scientific theory must have is the capability of being falsified. The crux of the matter is not whether there is evidence which the theory satisfies – other theories may be able to do the same – but whether evidence exists which contradicts the theory.
Thus far, because they are falsifiable, Darwinian evolutionism and biblical creationism both have the characteristics of a scientific theory.
But both have been falsified, notwithstanding that they continue to be advocated as vigorously as ever. Adherents promote them for all they are worth despite their having failed as scientific theories. Both beliefs – as each party indeed says of the other – function as myth, satisfying the basic questions about where life came from and where it is going, and determining how reality is perceived. They provide the rules which govern the interpretation of everything else. Going to the core of one’s being, they are immune from investigation and generate only taboos.
If the two doctrines are both wrong, there must be a third possibility, as argued by this website. The following summaries show just how comprehensively current theories have been falsified.
Next: Problems with creationism