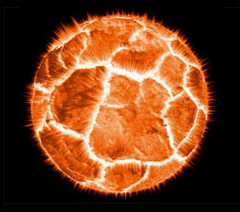 An exploding cloud of aluminium-silica-rich vapour could have been the result of a planetary body suffering one of two processes: rapid pressure release following shock compression in a collision, or a rapid rise in temperature generated from within.

Within a multimillion-year timescale for solar system formation, the current approach is to imagine a sea of planetesimals slugging it out in repeated impacts until a few attained the rank of planet. Later, certainly, impacts were a common occurrence. However, the oldest datable particles in the solar system – the condensates and melt droplets – suggest that bodies of planet rank existed prior to the era of destruction. The larger the bodies were initially, the fewer, and the less likely that collisions between them would occur, even if somehow they could have been disturbed from their orbits. An impact scenario commends itself only because the heat generated by radioactivity, although much greater than now (because there was much more radioactive matter and some half-lives were much shorter), would not have been high enough to cause whole planets to burst.

But perhaps rates of radioactivity themselves were higher? The abundance of radioactive aluminium-26 shortly before the explosions may offer us a clue.

If heat deep within a terrestrial planet were to have increased more quickly than it could have been conducted to the surface and radiated away, the outer parts would have remained solid. Before long, thermal expansion of the interior would have ruptured the outer parts and magma pouring up through the fractures would have overwhelmed the planet. This appears to be what actually happened. The oldest rocks of every extant terrestrial planet are igneous: Mercury, Venus, Mars and the Moon were once blanketed with magma to a depth of several kilometers. So was the Earth, only here the effects were mitigated by the simultaneous release of an ocean of subterranean water.

The planets still in existence did not explode. Why not, since others did? We need to delve more fundamentally into the origin of radioisotopes. For short-lived isotopes we can rule out a creation origin, since some were so short-lived that they can have come into existence only shortly before the chondrules and CAIs in which they were trapped. But in that case, long-lived isotopes must also have had a natural origin, since whether a radioisotope is considered short-lived or long-lived is only a matter of degree. As measured on the basis of present decay rates, half-lives can have lengths of minutes, billions of years or anything inbetween.

The usual explanation for the presence of radioisotopes in the solar system is that they were synthesised in supernovas. Long-lived isotopes such as uranium were generated by supernovas and injected into the nebula well before it collapsed into a star-forming disc; the most ephemeral came from a nearby supernova happening to occur at the same time. But as we have seen, that scenario has its problems, including the inability of supernovas to synthesise 10Be and 36Cl. Moreover, if chondrules, CAIs and matrix all came from existing planets, this indicates that unstable isotopes were synthesised within the planets themselves rather than anywhere outside the solar system. New elements would have formed by nuclear fusion and fission.

Thermonuclear fusion is the process that generates the energy of all stars, including the Sun. Around their centre, temperatures are high enough to overcome the electrostatic forces that keep atoms apart, and under high pressure the atoms fuse, creating new elements. At the same time, excess binding energy is converted into heat energy. The Sun is a relatively small star, so the temperature at its core – around 15 million degrees C – is sufficient only to fuse hydrogen, the simplest of elements, into helium. More massive stars can go further and fuse helium into carbon, nitrogen and oxygen (in what is known as the C-N-O cycle). Typically the temperature required here is around 100 million degrees.

Rates of radioactivity are related to the speed of light. The higher the speed, the faster isotopes decay, because a faster speed of light results in a lower atomic mass and lower binding energy. Likewise the threshold above which nuclear fusion begins to take place is lowered. The natural disintegration of atoms and the natural synthesis of atoms are controlled by the same factor. Thus, if the speed of light had once been much faster, the temperatures that enable the Sun to fuse only hydrogen atoms would then also have facilitated the synthesis of carbon, nitrogen and oxygen.

Since we do not know exactly what elements lie at the centre of the Sun, the only evidence we have to go on is the abundance of elements in its atmosphere. Depending on the degree to which convection mixes the interior, these may or may not be representative of what lies within. We also need to be bear in mind that plunging debris from exploded planets would also have added heavier elements. Consequently, if only helium nucleosynthesis had ever gone on, we would expect atmospheric abundances for all elements after hydrogen and helium to reflect chondritic abundances. That is not the case. The Sun’s atmosphere contains three elements that substantially exceed chondritic abundances: nitrogen (40.6 times more abundant), carbon (9.9 times) and oxygen (1.8 times) – the very elements that today are the product of nuclear fusion in more massive stars, where they occur in much the same proportions. Thus we have evidence that C-N-O nucleosynthesis did occur in the past, and that thresholds for thermonuclear fusion were once much lower than now. Heavier elements may have been synthesised in processes requiring still higher energy levels, but because their density may have put them beyond the power of convective currents to dredge them up, any such elements are likely to remain in the core, beyond detection. That possibility therefore remains hypothetical.

With electrostatic forces being so much lower, nucleosynthesis may also have taken place in planets. However, in terrestrial planets the paths taken would have been rather different, for these bodies already had a full complement of stable elements. A radioactive element might have been generated simply by capturing or knocking out a neutron. As with stars, the thresholds for nuclear reactions would have been proportional to size, with larger planets more capable of nucleosynthesis than smaller ones. Consequently, the answer to the question why some planets but not others exploded is that it was the biggest that exploded – hence the large volume of rocky matter in the cores of the giant gas planets, far in excess of the volume comprised by Mercury, Venus, Earth and Mars. 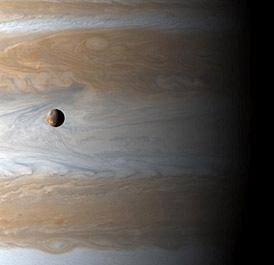 Since the gaseous planets are much more massive than the rocky planets, fusion may also have gone on in their interiors. Jupiter’s composition is approximately 90% hydrogen and 10% helium. Being smaller, Saturn has a lower proportion of helium, around 6%. One of the greatest mysteries of solar system physics concerns the fact that these planets radiate twice as much energy as they receive from the Sun (Smith et al. 2007), one suggestion being that the excess heat arises from deuterium fusion. Given that the gaseous planets started as pure hydrogen bodies, however, the simplest explanation is that the excess is residual heat from the fusion of hydrogen into helium.

Whatever the mechanism, the strength of the case for attributing chondrules to large-scale explosions is widely acknowledged. ‘Most chondrules formed by impacts’ (Hutchison et al. 2005). ‘Chondrules and refractory inclusions are impact-melt objects’ (Sears 2005). ‘Chondrules and metal grains in the CB chondrites formed from a vapour-melt plume produced by a giant impact between planetary embryos’ (Krot et al. 2005). ‘Entire planetesimals were melted internally by the decay of 26Al, and collisions led to the splashing of their liquid contents. Cascades of molten droplets would thereby have been lofted into the nebula where they would have cooled to become chondrules.’ (Sanders & Taylor 2005) The feasibility of such an interpretation has grown as it has become clear that differentiated bodies – those that gave rise to iron meteorites and angrites – existed already before the formation of chondrules (Sokol et al. 2007, Burckhardt et al. 2008, Kleine et al. 2009). Chondrites do not represent the primordial material from which asteroids accreted and then differentiated.

It is no longer controversial that chrondrules originated from mantle silicates that underwent catastrophic heating. Extreme pressure, whether generated internally or externally, caused the planet’s crust to burst. Unloading vaporised the exploding mantle, and as the gases dispersed they condensed into silicate-rich droplets. In outer space they coalesced with pulverised crustal material, shock-heated rock fragments (‘metamorphic clasts’) and water vapour to form a multitude of compact aggregates, the parent bodies of what we now call chondrites. Some of the fragments may have been 100s of kilometres in diameter. As they flew apart, some crashed into other planets, some went into orbit around them, and some formed a circumsolar belt in the region previously occupied by their progenitor. Radiogenic heating continued within the new bodies.

There is thus accumulating evidence to indicate that, like chondrules, CAIs derive from planetary explosions. As yet, the idea is controversial, but it is now being discussed (Sears; Sanders 2009).

Next: 8. Events in real time