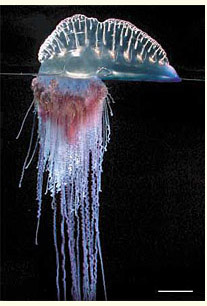 The Portuguese man-o’-war, Physalia physalis, is one of around 175 species in the order siphonophores, class Hydrozoa. Drifting on the surface, blown by winds and carried by currents, it is not a typical siphonophore, for most species are active swimmers beneath the surface. A few – the rhodaliid family – live tethered by their tentacles to the sea bottom, on volcanic hydrothermal vents up to a thousand metres beneath the surface. Because of their inaccessibility and fragility, siphonophores are difficult to collect, and relatively little is known about them.

Siphonophores are colonies of polyps and medusae that function together as a single organism. At some point in the history of the Hydrozoa, in what can only be conceived as a quantum jump, the ancestral genome reconfigured itself to code for a structure whereby individuals budding off from each other transcended their individuality and (losing many functions in the process) became so specialised that they could survive only in cooperation. Each zooid – each polyp or medusa – had to depend on the others for what it could not do itself, merging its individuality into something greater. Some specialised in secreting gas for buoyancy, others in propulsion, predation, digestion and reproduction. Multicellular organisation was taken to a new level, in a transition engineered, it seems, to convey an expressly non-Darwinian message: the hydrozoan genome had the ability to reprogram itself. It ‘knew’ where it was going from the outset. 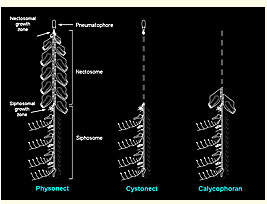 Siphonophores come in three basic designs: physonects, cystonects and calycophorans, and the designs consist of three basic modules: a float, a nectosome and a stem. The float is usually small. Attached to the float is the nectosome, studded with medusae whose pulsations propel the colony forwards and backwards. The stem, which all siphonophores have, connects the other specialist zooids, arranged in a pattern unique to each species. As the photographs illustrate, the diversity of form produced by the architectural variations is immense. Physonects have the full complement of modules. Cystonects lack the nectosome and thus have no capacity for independent movement, while calycophorans lack the float. In the evolutionary tree – proposed by Casey Dunn et al. (2005) – cystonects are the most ancient of the three siphonophore groups, with calycophorans nesting within physonects.

The Portuguese man-o’-war, a cystonect, comprises four main types of polyp. A single polyp forms the large gas-filled float that sits on the ocean surface and acts as a sail. Other polyp types specialise as feeding tentacles (gastrozooids, of which there are three types), defensive or prey-capturing tentacles (dactylo- zooids) and reproductive organs (gonozooids). The tentacles hang to a depth of up to 40 meters and deliver a powerful sting.

Different authors have attempted to deduce phylogenies from the number of zooid types in various species, with opposite results, depending on whether siphonophore evolution proceeded by a reduction or an increase in functional specialisation. The most recent reconstruction suggests the trend may have been towards zooid loss:

Our findings indicate that there has been a complex history of functional specialization in siphonophores. … We find no bias in favor of the gain of zooid types, and some evidence of a bias towards the loss of functionally specialized zooids.

Two types of zooid appear to have arisen at a later stage. (If this is getting difficult to follow, then marvel at the complexity, for it reinforces the point that the history of life cannot be explained as atoms haphazardly assembling themselves into showpieces of consummate engineering: all evolutionary change is coded.) One type of zooid is the medusas that make up the nectosome, since the most ancient group in the evolutionary tree, the cystonects, lack a nectosome. The other is the bract, of which there are four varieties. Bracts are absent in the cystonects but present in physonects and calycophorans. The four varieties of bract both increase and decrease in number across the phylogeny.

The other main zooid types studied are gastrozooids and palpons. Cystonects have three types of gastrozooid, whereas most species make do with only one; the other two types were lost. Palpons are present in cystonects but absent in physonects and calycophorans. The fact that calycophorans nest within physonects in the genealogical tree indicates that the float polyp was also present in the most ancient siphonophores and subsequently lost.

The origin of the siphonophore body plan is unexplained by a scenario where novelties are gradually acquired through mutations that happen to confer an advantage, each mutation taking its place within a continually functional, multi-tiered system of interdependent parts. The body plan appears to have emerged from its hydrozoan forbear with close to its full complement of zooids. Past and present, it is a wonderful, even beautiful, example of design.