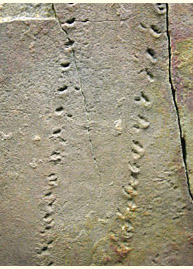 How ‘animals conquered the land’ constitutes a critical chapter in the Darwinian story. Life originated only once, in the sea, and for hundreds of millions of years the only animals on the planet were marine animals. Today there exist also terrestrial animals. At some point evolution had to take steps onto the land.

The recolonisation story is rather different. It identifies the cataclysm of the ‘Late Heavy Bombardment’ at the beginning of geological history with the global cataclysm attested in ancient tradition. Terrestrial life had yet to appear in the geological record, and absence which Darwinists interpret as evidence that it had yet to evolve; the oral historical record says that it had been obliterated. Marine life might have survived in lakes and in seas at the poles or deep under ground. Insects, birds, reptiles and mammals could not have survived unaided. They must have had a different origin: namely, a huge wooden capsule designed to withstand the buffeting waters and preserve a breeding pair of every terrestrial species then in existence, including one human family. Thus while all forms of life were capable of evolving in the sense of adapting to the ever-changing conditions of the new world, and although fish might have evolved as far as amphibians, that was the ordained limit; insects, birds, reptiles and mammals did not come from the sea.

Having long since recovered, life today recognises no sharp boundary between land and sea. Some animals can be perfectly at home in both environments: not because they are now evolving from one to the other but because they are most comfortable at the boundary. Mudskipper fish use their pectoral fins to hop about on the shore and perch on mangrove roots. Turtles spend their lives in the sea but when the time comes to lay their eggs use their flippers to crawl onto land. Seals, like penguins, spend much of their time in the water but haul themselves onto land to breed and raise their young.

It is equally clear that such animals were not created thus. Seals evolved from land mammals, turtles from land reptiles, and mudskippers from an order of ray-finned fish that, like all fish, evolved from soft-bodied forms that left no fossil record. Whether in a landward or a seaward direction, they are not the only ones to have undergone evolutionary transitions across the land-sea boundary. While the earliest snakes descended from terrestrial lizards, several ingenious species have since become wholly or partly adapted to an aquatic life. Land crabs, velvet worms, ribbon worms, ostracods and snails all have ancestries that began in the sea.

Nonetheless, it is striking that where the transition involved adapting from a marine to a terrestrial environment, the degree of transformation was much smaller than occurred with transitions in the opposite direction. Crabs still remained crabs, ostracods still ostracods. In cases involving the most radical transformation, such as seals and turtles, the shift was invariably in the direction from land to sea. While several invertebrate phyla made the transition from sea to land, it is not clear that any vertebrate group did. 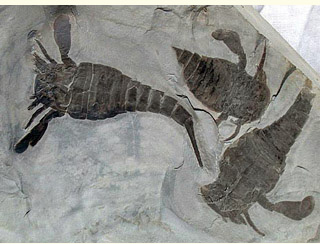 Amphibian ‘tetrapods’ first appeared in the Devonian, but they were not the first aquatic creatures to have been capable of living on land. So far as the fossil record is concerned, the first such were the eurypterid family. Early eurypterids were marine; later forms seem to have inhabited shallow-water environments such as the inter-tidal zone. Some reached lengths of over 2 metres, a record for arthropods; others were much smaller. The earliest eurypterids date back to the Ordovician. Although they resembled scorpions, they were not directly related to them (if at all). They are not preceded by any simpler organism evolving into a eurypterid, and they became extinct in the Permian.

Another group of arthropods that had an amphibian lifestyle were horseshoe ‘crabs’. Also first appearing in the fossil record in the Ordovician, they were not true crabs but a unique class (Xiphosura) without obvious ancestry to any other animal kind. They look somewhat alien, but unlike the eurypterids, they are still extant, so we know much more about their anatomy, behaviour and life cycle. One of their most remarkable features is their two kinds of eye: two simple eyes in the centre of the carapace, sensitive to ultraviolet light, and two compound eyes nearer the sides.

Apart from the fact that they were much more diverse in the Palaeozoic than today, the main trends in the evolution of horseshoe crabs were an overall increase in size and a loss of segmentation on the rear part of their carapace. They have always been primarily aquatic, feeding off worms and shellfish on the seafloor, but they failed to evolve a means of reproducing in water – which, as with turtles, 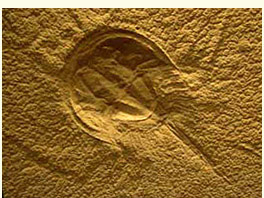 rather suggests a terrestrial origin. Eggs are laid in nests in sandy beaches, from which the larval crabs emerge soon after hatching and instinctively enter the sea. They moult more than 16 times before they reach adult size, including 4 times within the egg.

Horseshoe crabs span the greater part of the macrofossil record, and although they have evolved in the sense of diversifying into two suborders and various families – and doing so very early, in the Palaeozoic – they have not evolved in any sense corroborative of Darwin’s theory. Throughout they remained true to type: complex organisms from the beginning, with a complex life cycle, and an example of animals designed for existence at the interface between sea and land, whatever their evolutionary history was before the Ordovician. Throughout they took up oxygen through gills, not lungs – specifically, book gills, a unique feature among aquatic animals. They are proof that an ability to walk as well as swim carries no implication of being in evolutionary transit from one to the other.

It was once hoped that scorpions might show evidence of having made the transition from sea to land, but until recently the fossil record was too fragmentary to pronounce on the question. That is no longer the case. In 2020, a report came out of a well preserved fossil from the early Silurian, the oldest scorpion yet found (Wendruff et al. 2020). Here is part of the abstract:
Elements of the circulatory, respiratory, and digestive systems are preserved, and they are essentially indistinguishable from those of present-day scorpions but share similarities with marine relatives. At this early point in arachnid evolution, physiological changes concomitant with the marine-to-terrestrial transition must have occurred but, remarkably, structural change in the circulatory or respiratory systems appear negligible.

Scorpions ‘must have’ evolved from ancestors that lived in the sea, because in the Darwinian scheme there is no alternative. Evidence of such a transition, however, is negligible: merely the same similarities with marine so-called relatives (such as eurypterids and xiphosurans) that modern scorpions have.

The case for exclusive terrestriality is not water-tight, since the fossil does not show whether the animal had lungs or gills (the oldest preserved lungs are early Devonian). Nor are the legs preserved. A mid-Silurian specimen had anatomically modern legs, but the dimensions suggested that it walked on tip-toe rather than on the entirety of its last segment. In all probability, early scorpions were adapted to life at the shoreline. That is where the food was, after all, not deep inland. Scorpions became more terrestrialised as the Palaeozoic progressed. 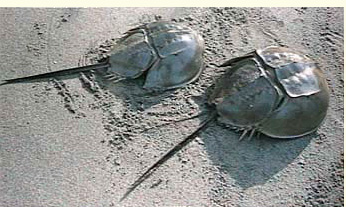 In short, the first animals to make tracks on land were not the tetrapods but eurypterids. As we shall see in the next section, the earliest wholly terrestrial animals in the fossil record are also not tetrapods, but myriapods – centipedes and millipedes – living about the same time as the eurypterids. They were closely followed by insects. Neither myriapods nor insects show any evidence of having emerged from the sea.

Next: 7. The first plants – colonising wetlands.