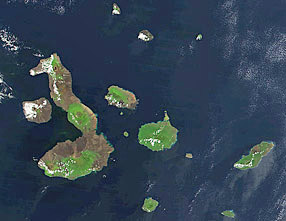 Charles Darwin was a geologist and naturalist of broad interests, from the formation of vegetable mould to the growth of coral reefs on tropical atolls. We associate him most of all, of course, with the ostensibly new proposal that species had changed and diversified over time. The making of that case, in The Origin of Species, had involved traversing a wide range of topics, one of them being the geographical distribution of species. Was it reasonable to suppose that species had been separately created, all in the places where they occurred today? The question was most acute in relation to the flora and fauna of oceanic islands, and there was much to suggest that the answer was no.

The Galapagos archipelago, situated under the equator, lies at the distance of between 500 and 600 miles from the shores of South America. Here almost every product of the land and of the water bears the unmistakeable stamp of the American continent.

There are twenty-six land birds; of these, twenty-one, or perhaps twenty-three, are ranked as distinct species, and would commonly be assumed to have been here created: yet the close affinity of most of these birds to American species is manifest in every character, in their habits, gestures, and tones of voice. So it is with the other animals, and with a large proportion of the plants.

It seemed evident that species had colonised the islands from locations often very remote from them. Diversity increased as organisms adapted to the new environments.

This got Darwin thinking about how the colonists could have travelled such large distances. He dangled the feet of a duck in an aquarium where fresh-water snails were just hatching, and observed how the minute hatchlings crawled onto the bird’s feet and clung to them so firmly they could not be shaken off. In a single day the duck could have flown hundreds of miles before next alighting on a pool or a rivulet, bringing the molluscs with it.

The same discovery applied to the dispersal of plants. On one occasion he took some spoonfuls of mud from the edge of a little pond:

This mud when dried weighed only 6 3/4 ounces; I kept it covered up in my study for six months, pulling up and counting each plant as it grew; the plants were of many kinds, and were altogether 537 in number; and yet the viscid mud was all contained in a breakfast cup!

It was thus easy to see how water-birds might transport the seeds of plants on their muddy feet to ponds far afield. Wind transport could do much the same: a water-beetle had once breezed onto the ‘Beagle’ when it was forty-five miles distant from the nearest land.

All in all, the close relationships between lowland and highland species, between mainland and island species, and between the species of different islands of the same archipelago were all inexplicable on the ordinary view of on-the-spot independent creation. They were, however, explicable if one postulated colonisation from elsewhere, followed by adaptation. Nature was not static, either in time or space.

Darwin was right. And he was especially right in indicating that the explanations at stake were independent creation versus colonisation and descent with modification, not creation of all species separately versus evolution of all species from a common ancestor. It was but a short step to infer that species were created with a capacity to adapt to new environments, though he never entertained the possibility himself.

Of all the topics that could have still interested him in his final year, it was the question of how organisms reached new environments to which he returned. David Quammen draws out the significance of this in his biography The Kiwi’s Egg (2007):

Darwin had investigated such means of dispersal, back in the 1850s, with his experiments involving saltwater immersion and other forms of simulated environmental travail. He had rafted asparagus across tiny seas. He had shoved seeds into the bellies of dead fish, fed the fish to pelicans, then collected the pelican poop and extracted the seeds to see whether they retained their capacity to germinate. He had dangled duck feet in an aquarium full of freshwater snails, inviting the adventuresome to take hold. And now he found fascination in a similar piece of data, derived not from experiment but from accidental observation. Somewhere near Northampton, in a stream or a pond, a small freshwater clam had clamped itself onto the leg of a beetle.

One beetle, dragging a miniature mollusc. Extracted from its scientific context, from the questions of dispersal and biogeography and evolution versus special creation, it seems utterly insignificant. Maybe it seems insignificant within its context. But it didn’t to Darwin. He described the beetle-clam connection in a short note to Nature, which appeared on April 6, 1882. Titled “On the Dispersal of Freshwater Bivalves,” it was his last published work. The point was simple but substantive: Here’s evidence of how a fertile clam might travel by air (since water beetles fly as well as swim) from one pond to another and establish a transplanted population in a new place. Dispersal, biogeography. Colonization, and then a fresh phase of evolution.

That is exactly it: evolution as part of a cycle of dispersal and colonisation, not Nature engendering forms from the mud of some warm pond as if it had powers of creation.

The key facts were dispersal, adaptation, speciation. From these Darwin inferred a story whereby organisms, however wondrous, came into existence by chance, and natural selection acting on random variation was the mechanism that put this view on a scientific footing. Random variation could generate even the eye, the brain and the liver, given enough time. All biological structures could, in principle, be broken down into a linear series of innumerable additions, each building on what went before.

That is not, however, the modern view. DNA may be linear, but the programs it encodes are anything but: they are complex networks where genes interlink and interact, controlled in many instances by systems that switch them on or off in their entirety, versatile instruments of design. Large-scale evolution cannot occur piecemeal, because a change affecting one part of the body almost always has knock-on effects on another. Evolution requires orchestration, so that the whole organism remains a viable entity. The story emerging is one of plants and animals being programmed in advance to disperse, adapt and speciate: not natural selection acting on chance mutations, but biological systems producing and facilitating purposeful variation. Was such provision not implicit in the words, ‘be fruitful and multiply’?