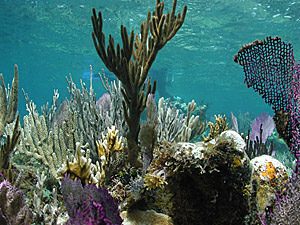 Cnidarians are marine carnivores that include corals, anemones, jellyfish and siphonophores (such as the Portuguese man-o-war). They occur in shallow waters, warm and cold, and once encountered are not easily forgotten. Corals are known for their extravagant shapes and for building reefs. Anemones, although usually sessile, can move around when they need to (which shows they are animals, like all cnidarians). Jellyfish float, move by pulsating their umbrellas and hang about sometimes in huge numbers, menacing whatever comes near. Lion’s mane jellyfish reach widths of over 2 metres, with tentacles descending to 30 metres; some siphonophore species reach a length of over 40 metres. The stings of a box jellyfish can kill a human being in five minutes. In a world which hides all origins, where did these alien creatures come from?

A phylum is the highest level of classification after kingdom and groups together organisms with fundamentally the same architecture. Cnidaria (the ‘c’ is silent) is one such phylum. There are around 10,000 species today, representing diversification on a very large scale. A diagram such as the one below gives only the barest summary. As so often in evolutionary history, the phylum divided early on into two radically different subgroups. One was the Anthozoa (literally ‘flower animals’), comprising corals and anemones; the other was the Medusozoa, comprising jellyfish, siphonophores, hydras and the like. Both were present from the early Cambrian, when animals first appeared in the fossil record. 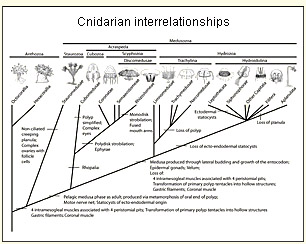 The cnidarian body plan comes in two forms, polyp and medusa. Anthozoa take the stationary polyp form, Medusozoa the planktonic bell-like form, although the life cycle of most Medusozoa includes both. The cycle begins with the production of eggs and sperm. Fertilised, the egg develops into a larva, the larva attaches itself to a hard surface and grows into a polyp, and the polyp buds off larvae which grow into adults, ready to begin the cycle afresh. As if to obscure relationships further, Anthozoa polyps organise themselves into coral colonies that look nothing like the individual members, marvellously assuming the shape of fingers, mushrooms, cups, stag’s horns, brains. To maintain such shapes they secrete calcium carbonate, staying retracted within the skeleton by day and feeding openly at night. A few Medusozoa also develop calcareous skeletons at the polyp stage. Others, such as Portuguese men-o-war, are free-floating colonies of polyps and medusae that look like a single medusa.

Polyps and medusae have the same body plan. Two tissue layers sandwich a jelly-like layer and enclose a digestive cavity. An opening at the end of the cavity ingests food and expels waste, served by a fringing ring of tentacles. Most distinctive are the stinging cells on each tentacle, called nematocytes or cnidocytes (‘nettle cells’). The cnidocyte contains a coiled tubular filament, which if triggered by any creature brushing against it shoots out and injects the intruder with a potent toxin. In addition to their great variety of toxins, the cnidocytes are also very diverse. Some are barbed harpoon-like structures, others stick to the victim, some wrap around it like a lasso. Described by Richard Dawkins as ‘probably the most complicated piece of apparatus inside any cell anywhere in the animal or plant kingdoms’, they are a classic example of design. Cnidocytes are an utterly unambiguous character diagnostic of the whole group: all organisms with the cnidarian body plan have cnidocytes, and only cnidarians have them.

Stinging cells aside, cnidarians tend to be regarded as comparatively simple animals and most biologists place them near the root of the animal tree of life, above sponges but below vertebrates and all other invertebrates. Although they have no brain, in absolute terms they are far from simple. Part of their complexity consists in the way polyps and medusae of various types cooperate as superorganisms, or in the way they reproduce. For instance, Nematostella – a sea anemone frequently used in laboratory experiments – can come into being: 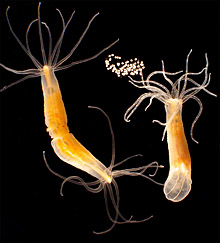 Any one of these reproductive processes is enough to inspire awe, but all four in the same organism? The fact that natural mechanisms control such phenomena does not detract from their miraculous quality. The natural and the supernatural intersect: in the ingenuity of its programming nature is itself supernatural, the visible reflecting the glory of the invisible.

Their genes
These days complexity tends to be assessed by studying the genes rather than the morphology. When cnidarian genomes were analysed, the results were not what reductionist ideas about life led biologists to expect. The same signalling pathways and transcription factors involved in the development of higher animals turned out to be present even in these supposedly lowest ones. Writing in 2005, Ulrich Technau and colleagues concluded:

The resulting data set is much more complex than might be assumed, based on morphology, and implies that much of the genetic complexity commonly assumed to have arisen much later in animal evolution is actually ancestral. .. In many respects, the complexity of the anthozoan gene set does not differ substantially from that of vertebrates and frequently exceeds that of the model invertebrates Drosophila [fruitflies] and Caenorhabditis [nematode worms].

Indeed, animals higher up the tree appeared to have lost many of the genes present in the cnidarians. ‘It stands to reason”, wrote Elizabeth Pennisi in the journal Science, ‘that the more genetically complex an organism is, the loftier its place on the evolutionary tree.’ Having branched off from the most primitive cnidarian before medusozoans, anthozoans were expected to be amongst the simplest of animals, yet they proved not to be. “The genomic complexity of … cnidarians is much greater than expected,” commented John Finnerty, an evolutionary biologist at Boston University. “There is no simple relationship between the numbers of genes an animal possesses and its complexity at the morphological level.”

More surprises were to come. In 2007 a team led by Nicholas Putnam and Daniel Rokhsar reported the results of sequencing Nematostella’s entire genome. One surprise was its size: an estimated 18,000 protein-coding genes, comparable to the figures for other animals (human beings have fewer than 20,000). Another was finding 1,292 families of genes that it shared with vertebrates such as pufferfish, frogs and humans but not with fellow invertebrates such as nematodes or fruitflies, despite worms and flies having supposedly evolved from animals that included these gene families. This was also despite their having evolved along separate paths, so that one would not have expected them both to have lost the same genes. Whole blocks of genes, in the very same order, were found in the anemone and human genomes. In short, the picture was one of ‘extensive conservation in gene content, structure, and organization between Nematostella and vertebrates’.

The sea anemone genome is complex, with a gene repertoire, exon-intron structure, and large-scale gene linkage more similar to vertebrates than to flies or nematodes, implying that the genome of the eumetazoan [all-animal] ancestor was similarly complex.

The results resoundingly refuted the doctrine of a universal common ancestor. However, the implication was not entertained. The only interpretation on offer was that genes were ‘lost’ by some of the higher animals.

The study exemplified the ‘heads I win, tails you lose’ reasoning of molecular studies into the history of life:

Evidence refuting the single-tree hypothesis is always explained away.

If one is not simply to beg the question, relationship has to be established first. Within the cnidarians it may be appropriate to talk about gene loss, because here the inference of a genealogically united group is strong. And indeed, at least two sequenced species, Acropora and Hydra, appear to have undergone substantial gene loss in the course of their evolution (Kortschak et al 2003, Miller et al 2007). The loss of several anatomical features is equally striking (see figure). Hydrozoans are characterised, for example, by the absence of gastric filaments and certain intra-mesogeal muscles. On the other hand, there were also gains in complex features, the most remarkable being the multiple eyes of the box jellyfish. The re-emergence of statocysts (a balancing organ) in the Leptothecata after their ancestors had lost them is another example. Because the genetic machinery governing such features cannot just spontaneously evolve, it is likely that we are here dealing with gene re-activation rather than gene gain. All things considered, the first cnidarians were probably more rather than less complex than their modern-day descendants.

Much the same observations can be made of the other animal phyla in the fossil record, most of which appear about the same time as the cnidarians, others later. When they first appear, they are already complex. The hope has been that modern genetic analyses would do something to counterbalance the negative evidence and show that, deep down, the oldest animal phyla are much simpler than they look. Researchers have been disappointed.

It will be interesting to see what the project to sequence the sponge genome reveals. In the atheistic tree of life sponges are the phylum immediately below cnidarians, and the prediction – the expectation, though even that must be tempered by experience – is that sponges will be genetically simple. The signs are not so far promising.