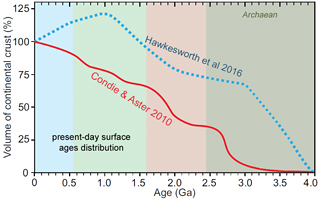 Present-day continental crust, which typically has a thickness of 30–40 km, did not form all at once. While estimates carry large margins of uncertainty, at least 35%, possibly as much as 75%, is thought to have formed during the Archaean and most of the rest during the subsequent Proterozoic (2.45-0.54 Ga), by upwelling of hot, liquid rock from the mantle. Most of the older rock was later remelted into granite or eroded into sediment, but in a few parts of the world the original rocks are exposed at the surface, mainly as a result of uplift and overlying deposits being stripped away. At the start of the Archaean the whole Earth was under water.

Rocks may be analysed by origin into three basic types: 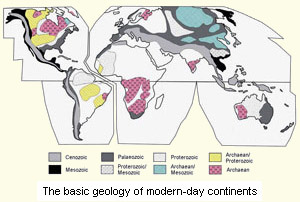 By far the most common igneous rocks in the Earth’s crust are continental granites and oceanic basalts. Clastic, sedimentary rocks constitute a relatively small proportion of the total but are common after the Archaean at the top of continental crust. They occur most voluminously in areas of uplift, where weathering, landslides and tectonic dislocations erode the mountains and distribute the product across low-lying plains and basins. The most common sediments are mudrocks, such as shales. When rocks are subjected to intense heat or pressure, they recrystallise and/or their mineral composition changes, in a process known as metamorphism. Among the more familiar types of metamorphic rock are marble (metamorphosed limestone) and slate (metamorphosed mudstone).

How the first cratons came into being – the crustal blocks around which further crust nucleated to produce continents – is not well understood. Interpreted within the framework presented here, cratons are the much altered remains of the impact craters that formed at the end of the Hadean. As on the Moon, the energy of the impacts melted the rock beneath to depths of hundreds of kilometres, generating deep wells of liquid basalt. However, below the Earth’s surface there were also large reservoirs of water, and in the wake of the impacts some of the water mixed with the basalt to form giant blobs of granite. Since granite is more buoyant than basalt, the blobs rose to the surface and elevated the impact sites above the surrounding water.

Around 35 craton fragments have been counted, some of which amalgamated during the Archaean and early Proterozoic to form larger units. The cratons floated on currents of magma, occasionally colliding and buckling into tight folds. As yet the crust was too soft to support high loads of rock.

Most Archaean rocks reflect catastrophic conditions. The Archaean was a more violent time than any other in Earth history, and dominated by igneous processes. Some tracts underwent extraordinarily violent and complex folding. On a gross scale, however, the geology is relatively simple. Characteristic rocks include gneisses, granite-greenstone belts and, around the craton margins, late-Archaean clastic sediments.

Gneisses include Earth’s oldest rocks, such as those in northwest Canada and west Greenland, as well as making up the basement of cratons elsewhere. The original deposits – igneous and sedimentary – were later metamorphosed by high heat and pressure and strongly deformed, often forming beautiful wiggly bands. Pillow lavas and patchy beds of conglomerates and chemical deposits occur within the sequences, marking intervals when the rate of deposition slackened. 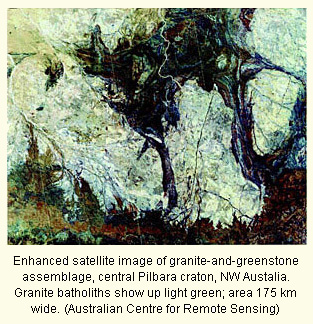 As the pummelled primeval basement cooled and solidified, lavas surged up through fissures to lay down thick underwater deposits known as greenstones – also now mostly metamorphosed. Greenish in appearance because they are rich in iron, such rocks are unique to the Archaean. Typically they comprise a lower, dominantly volcanic group and an upper sedimentary group. The sediments consist mostly of hydrothermal cherts and banded iron-formations, followed by shales, sandstones and conglomerates – eroded volcanics that were rapidly re-deposited as clastics by turbidity currents and debris flows.

This pattern of decreasing volcanics and increasing clastics reflects the phases of a single, continuous sequence, during which:

Both during and after deposition, the greenstone successions were intruded by huge granitic domes or batholiths, up to 100 km across. They originated from the partial melting of water-infused basalts. Inflating plumes of low-density magma rose through the still soft greenstones and shouldered them aside. By the mid to late Archaean some may have reached all the way to the surface; others were exhumed in the Proterozoic and later. The ascending granites transferred with them a significant proportion of heat-producing elements, enabling crust lower down to cool and stiffen.

Continental crust continued to be generated and cratons to amalgamate in the late Archaean. As their interiors stabilised, widespread sedimentary platforms and basins developed around the margins, showing that continental crust had attained sufficient rigidity to sustain sedimentary piles kilometres thick.

Canada’s Slave craton is a fairly typical example. After deposition of submarine basalts up to 6 km thick (2.73 Ga, column c), partially emergent volcanic and volcaniclastic sequences accumulated, then turbidites (2.68 Ga) as collisions led to folding and intrusions of granitic domes and the transient newly formed mountains were unroofed. The turbidites, in turn, were followed by conglomerate-sandstone sequences along regional fault systems (2.60 Ga). 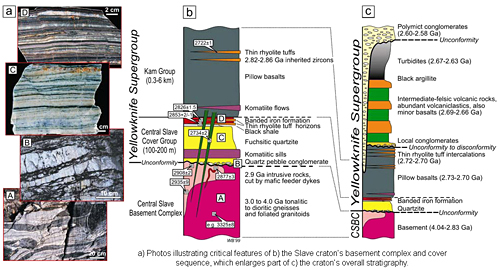 Comparable stratigraphies are observed in other places, such as the Dharwar (southern India), Zimbabwe, Wyoming cratons and parts of the Yilgarn craton (western Australia).

It is difficult to see how 1 billion years (beginning, say, from 3.5 Ga) can credibly be allocated to such processes. Averaged over a thickness of 30 km, 1 billion years translates to a rate of 0.03 millimetres per year. A single granite batholith in the Pilbara Terrane (above) spans a period of 650 Ma – equivalent to the entire length of the animal fossil record, much later in time. Volcanic eruptions do not erupt in slow motion. Before 3.3 Ga, sedimentary rocks such as sandstones, which originate from the erosion of igneous rocks, are rare. Everything about the Archaean indicates large-scale processes taking place rapidly, with occasional interludes. Even if we halved the timespan to allow for intervals of erosion and non-deposition, the average would still be only 0.06 mm per year: less than the thickness of a sheet of paper. Archaean geology is incompatible with the dates produced by radioisotope dating. While it is impossible to say exactly how long the period occupies, it seems more fitting to think in terms of thousands of years than billions.

Next: Recovery of marine communities