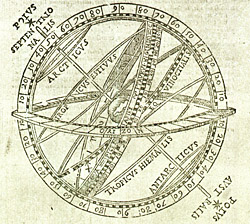 When astronomers first put their eye to a telescope to examine the solar system, they expected to see a world of perfect orbs of light, where nothing changed and all appeared as if it had always existed. The Earth was the sublunary realm where things were subject to mutability and decay. Above it was the supralunary realm of the planets and stars. Only the Moon seemed to be less than irregular. Its blemished aspect was attributed to variations in its density.

Since then, we have repeatedly had to adjust to discoveries that reveal the universe to be anything but eternal and unchanging. In the course of the 17th and 18th centuries the medieval view came to be replaced by one which integrated the heavens with the world below – a revolutionary advance on the medieval view, achieved by mathematics and observation. In the 19th and 20th centuries astronomers began theorising about the origins of the heavens in a way which went far beyond mere observation. Having understood that heaven and earth were made of the same elements and subject to the same physical laws, they concluded that the solar system was the product of those laws. All elements heavier than oxygen were generated in the furnaces of violently dying stars that sprayed the galaxy with clouds of dust and gas; the sun, moon and planets had effortlessly condensed out of those clouds.

That remains the picture today. Nonetheless, discoveries in the last few decades have forced astronomers to modify the ‘nebula hypothesis’, to the point where the addition of so many adjustments has left it looking like the patched-up Ptolemaic model of Galileo’s day. There is too little mass in some regions, too much mass in others, water almost wherever one looks, comets that should have dissipated ages ago, and episodes of intense bombardment by asteroids hundreds of millions of years after they should have ceased to exist. Asteroids, it is now apparent, are not pristine remnants from a time when particles were clumping together into bigger and bigger bodies, but accreted fragments of already large bodies that, very early on, blew apart. The primeval solar system was a place of violence and chaos.

The implications of these discoveries are discussed elsewhere on the site. The purpose of this page is to illustrate the scarred and broken nature of the inner solar system, where the rocky planets orbit. The heavens record a period of destruction, not birth. The only solid body that does not appear totally battered is the Earth, and that, only because plate tectonics has regenerated its devastated surface. Man’s sublunary dwelling place has not been exempt. 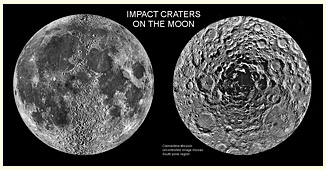 The lunar crust consists mostly of feldspar, and since feldspar is a mineral that crystallises from magma and rises to the surface, we know that the crust was once molten. Feldspar is light in colour and light in density. It is the mineral that makes up the lunar ‘highlands’, which comprise the Moon’s oldest rocks. Soon after the magmatism that formed the Moon’s crust, the highlands were pounded by asteroids. Craters covered the entire surface, and at least 60 of them measured more than 300 km across. Its largest, 2500 km across, is rather greater than the area of South America. The dark ‘maria’ consist of lakes of cooled basalt that erupted in the wake of the impacts, covering many of the crater floors. They preponderate on the near side.

The asteroids originated from exploded bodies that once orbited the Sun in the space between Mars and Jupiter. The cataclysm that deformed the Moon in this way also destroyed the Earth. The oldest rocks on Earth date to the years immediately after the cataclysm. 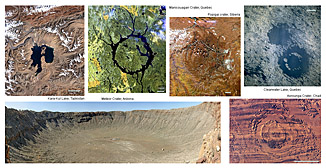 There are over 170 known impact craters on Earth’s continents, all of them postdating the cataclysm. They are the result of occasional collisions with the drifting residual debris. The two biggest craters are also the two oldest, Vredefort in South Africa (diameter 300 km) and Sudbury in Canada (250 km), both Palaeoproterozoic in age. There must also have been many impacts on ocean floors. However, submarine craters are more difficult to detect and, compared to continental crust, ocean crust is very young, owing to continual subduction. Chicxulub Crater, associated with the extinction of the dinosaurs at the end of the Mesozoic era, sits partly on Mexico’s Yucatan Peninsula and partly under the sea. The collage includes craters of diameter up to 100 km (scale bar c. 10 km). 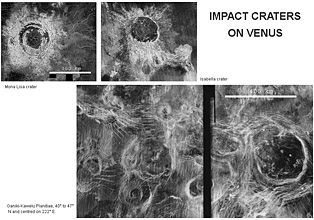 Venus’s surface cannot be distinguished by telescope because it is obscured by a thick atmosphere of carbon dioxide. Between 1990 and 1993, the space probe Magellan succeeded in capturing high-resolution radar images of its topography and revealed a crust pock-marked by craters.

Opinions concerning the age of Venus’s surface differ. The view that the planet was totally resurfaced by volcanism less than 1000 million years ago, i.e. late in its 4.6-billion-year history, now seems unlikely, in which case some of the circular structures interpreted as volcanic may in fact be impact craters. About 1000 pristine craters, distinguished by sharp rim topography and generally little-modified ejecta blankets, have been recognized, most of them with diameters less than 50 km. The biggest, Artemis, is 2000 km across. 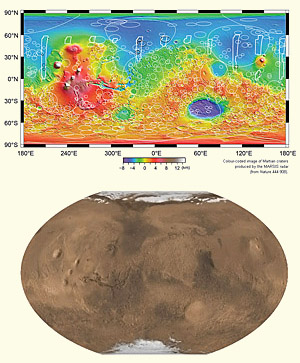 Mars preserves evidence of abundant water early in its history as well as of catastrophic bombardment. As with the other terrestrial planets, its oldest rocks are igneous, from a time when the interior of the planet was so hot that an entire ocean of magma rose to the surface. Subsequently the magma solidified to form a crust. Cooling was accelerated by continuous precipitation of water from outer space. At the end of the Hadean period, termed the Noachian in Martian geology, because there was so much water, asteroids pummelled the planet and gave rise to the biggest craters in the solar system. Ultraviolet light from the sun gradually broke down the water into hydrogen and oxygen, the hydrogen escaping into space and the oxygen combining with iron minerals to give the planet its red colour. Some of the water was absorbed into the ground.

The northern hemisphere of Mars is topographically lower than the southern, and appears less cratered. Recent work has shown that this northern depression is one massive impact basin, named Borealis. Lying 8 km beneath the level of the southern uplands, the deepest plains were once the floor of an ocean. Beneath the sedimentary deposits left by the ocean are numerous buried craters and a crust thinned by the Borealis impact to only about half the thickness in the south. A winding escarpment 20,000 km long marks the crater’s elliptical circumference.

Although Borealis is by far the largest impact basin, seven others also exceed 2000 km in diameter.