A winding road through the Hautes Alpes of south-eastern France, 1000 metres above sea-level, may not seem a likely place to find the deposits of an ancient estuary, but there they are, just south of the hamlet of Auribeau: one of the most remarkable sites in the whole Geopark. They date to the Miocene period, a comparatively recent time when the continents were starting to assume their present layout. The Alps, pushed up by the northward thrusting of Africa against Europe, were still rising. The Mediterranean Sea stretched all the way to the Indian Ocean, and branches of it still penetrated the mountain-forming zone. As the Alps rose, masses of eroded rock tumbled down the slopes and entered expansive river systems, filling up sedimentary basins close to the shore. Tides markedly stronger than those which now affect the Mediterranean swept the sediments back and forth, and because the currents flowed in both directions, sediment accumulated vertically rather than sideways. Continuing uplift eventually raised the area above sea-level, leaving the tidal rhythms for visitors in a later age to pore over – in particular, to consider a most provoking question: just how quickly was all this going on? 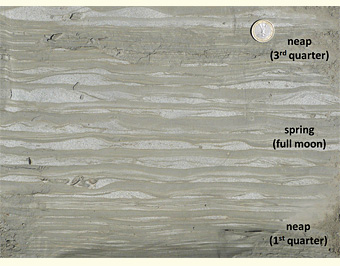 As a research student, Bernadette Tessier worked for several years on these deposits. Her key insight was to recognise that sediment was being supplied to the estuary fast enough for even the shortest astronomical cycles to be preserved. An outcrop 70 m thick comprised a series of 12-hour tidal bundles each recording a flood tide upstream and an ebb tide downstream. The lighter laminae consisted of sandstone, deposited when the tide was strongest, while the darker laminae consisted of finer-grained silt, deposited during slack water. Bundles were thickest at the height of the monthly cycle, when the moon was full; bundles were thinnest at the bimonthly neap tides. At one juncture a shallow channel eroded into the sequence, followed by a series of beds that were each deposited within weeks, if not days. At an average rate of about 1 metre a month, the time taken for the whole succession to be deposited was around 6 years. To keep pace with deposition, subsidence must have been similarly rapid. 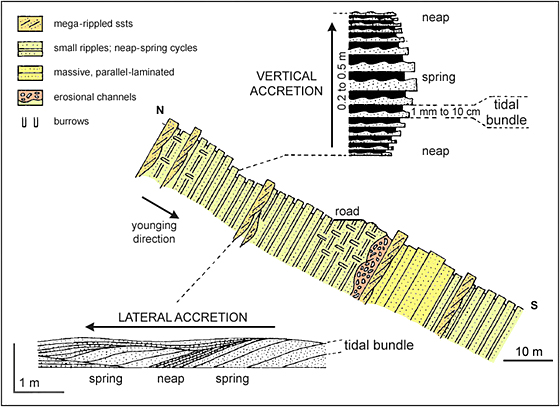 The outcrop forms but a small part of a unit 1200 m thick called the Marine Molasse Formation, comprising around sixty cycles of deltaic accumulation. On the basis of radioisotope dating, which assumes that the rate of radioactive decay has been constant through time, the unit is believed to have formed over 6 million years, at a rate of 0.2 mm per year. So far as the beds at Auribeau are concerned, the method is in error by a factor of some 60,000, and there is no reason to think that the error is any smaller in relation to the whole 1200 metres. Tidal beds characterise at least 50% of the formation and, as the fine-grained lithology confirms, their depositional environment, for the most part, was relatively tranquil. Most of the rest of the formation was also laid down in quiet conditions, albeit interrupted by storms. The clear evidence that rates of deposition were orders of magnitude higher than those imposed by radioisotope dating is not easily circumvented.

Noting the inconsistency, Tessier concluded that there must have been times when sedimentation just stopped. This is the standard exoneration, similar to Derek Ager’s characterisation of the whole geological record as ‘long periods of boredom and short periods of terror’ (discussed here). Such faith in the unseen is little different from creationism’s refusal to believe that sedimentation rates here could have been as slow as 1 metre a month. Tidal motions cannot be construed as short bouts of terror, and as Tessier acknowledged, significant hiatuses within the deltaic sequences are nowhere to be found. She also offered no evidence of hiatuses at the boundaries between sequences. The conflict between the geological evidence on the one hand and dogma on the other remains unresolved.

‘60,000’ is not a misprint, alas. That factor really is the extent to which dating methods falsify geological time.