Skip to content
Is the theory of evolution supported by the fossil record? Here is an opportunity to judge for yourself. The following pages discuss what have been called the top ten examples of major transformation: five seem well supported, five not. None of them uphold the story of evolution from fish to human being, suggesting that another theory is required. 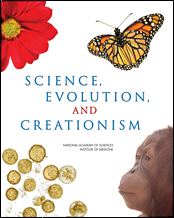 ‘Although many major questions in evolutionary biology remain unanswered,’ write Ulrich Kutschera (University of Kassel) and Karl Niklas (Cornell University), ‘no credible scientist denies evolution as “fact”.’ ‘Evolution is in effect as much a scientific fact as the existence of atoms or the orbiting of Earth round the Sun,’ states a Nature editorial. In its booklet Science, Evolution and Creationism the National Academy of Sciences says much the same: ‘There is no controversy in the scientific community about whether evolution has occurred. On the contrary, the evidence supporting descent with modification, as Charles Darwin termed it, is both overwhelming and compelling.’

All this is true. But unfortunately ‘evolution’ can mean different things. What the NAS booklet has in mind is the idea that ‘the common ancestor of humans and chimpanzees was a species estimated to have lived 6 to 7 million years ago, whereas the common ancestor of humans and the puffer fish was an ancient fish that lived in the Earths oceans more than 400 million years ago’. ‘Descent with modification’, on the other hand, merely sums up the fact that species change and multiply over time as they go their separate ways. This is a world away from saying that organisms are all related to each other, or that life is just highly organised matter.

As so often, a scientific fact has been merged with an atheistic belief about reality and the whole package wrapped up as fact in order to promote that belief. Try working out what ‘evolution’ means in the following passage (p 3 of the booklet):

The theory of evolution is supported by so many observations and experiments that the overwhelming majority of scientists no longer question whether evolution has occurred and continues to occur and instead investigate the processes of evolution.

Here it is not ‘descent with modification’ that is considered well-established – the fact that evolution has occurred – but the explanation of how it occurs, the theory of evolution through natural variants having a slight competitive advantage. Similar carelessness about what the word means results in this belief-driven tautology:

Evolution provides a scientific explanation for why there are so many different kinds of organisms on Earth and how all organisms on this planet are part of an evolutionary lineage.

Evolution provides an explanation for why organisms have evolved! Even if the word is intended to mean the belief that organisms all have the same ancestor, a scientific explanation should not presuppose what it seeks to prove.

The crucial distinction, we might say, is between horizontal and vertical evolution. Evidence of one is not necessarily evidence of the other. If evolution in the sense of nature creating itself has not been going on, Darwin’s theory is false; biologists and palaeontologists need to be actively seeking an alternative and guarding against being victims of pro-Darwinian propaganda. Science is about testing hypotheses and theories, not closing alternatives off: something, at least in principle, the authors of Science, Evolution and Creationism accept. ‘Any scientific explanation has to be testable. Unless a proposed explanation is framed in a way that some observational evidence could potentially count against it, that explanation cannot be subjected to scientific testing.’ Regrettably the admission accompanies a discussion that is silent about the problems of Darwin’s theory and shows no interest in exploring others except one, the creationist idea that evolution did not happen at all. A potty idea that is explored, of course, only in order that it may be debunked and Darwin’s theory appear reasonable in comparison.

In this section we take a closer look at what scientists count among the most striking examples of evolution in the fossil cabinet. Writing in 2004, Kutschera and Niklas focus on links between major groups of vertebrates and highlight ten, set out in the table below. All except one were discovered, described or analysed during the previous two decades. The exception is Tiktaalik, reported in 2006. It is now considered a much more convincing intermediate than Panderichthys, the intermediate proposed by Kutschera and Niklas. The fossils represent an important test of the theory, and we may put the test this way:

The intermediate forms sit within large gaps, often just at the point where major evolutionary changes are required to bridge major differences in habitat (e.g. sea/land) and biological organisation (e.g. fish/reptile). If the gaps were not large, they would not be on the list – we are not concerned with intermediates within more graduated lineages, such as those of ammonites, crocodiles or horses. To repeat: that organisms have changed over time is not in dispute, and sometimes the change has been large-scale. The issue (in the case of the vertebrates considered here) is whether fish actually became animals that walked on land, and land animals severally evolved into lizards, turtles, birds, mammals and human beings.

We also need to be aware that gaps of evidence are either evidence that the transitions never happened or accidents of a fossil record that is incomplete. Since fossilisation is a rare event, only a small percentage of organisms can be expected to be present in the record. The discovery of rare species that were rarely fossilised will be even rarer.

Verdicts are given in the final column. We have not evaluated all the alleged transitions in depth and two of the conclusions are therefore tentative, but currently the score looks to be be 5 out of 10, suggesting that Darwinists and creationists both need to reconsider their belief systems. Large-scale, horizontal evolution has certainly occurred, but it does nothing to substantiate the belief that humans evolved from fish.