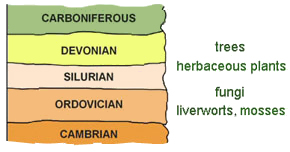 Imagine a world whose land surfaces were totally barren, and whose organisms were so reduced in number that life had to recolonise those surfaces from scratch, from isolated remnants that had somehow survived cataclysmic destruction. In what order would organisms have begun to appear in the recovery process?

Amongst the most important determinants of that order would have been reproduction rate, ability to disperse, the nature of the land surface (rock, clay or sand), atmospheric oxygen levels, and climate (temperature and water availability). Another factor would have been ecological succession. Organisms do not live in a vacuum: they live in ecological communities and participate in food chains/webs where larger organisms depend on smaller ones and the smallest depend on inorganic sources of energy.

Bacteria are not mere leftovers from an evolutionary process that soon moved on to higher things. They are more species of bacteria than all other species put together, and whether in the soil or in the human gut, they play a vital role. Animals are completely dependent on them. The same is true of other lowly organisms such as lichens and liverworts. They help to make the world habitable for more complex organisms.

As an ecological community develops, organisms at the bottom of the food chain establish themselves before those at the top. Rates of reproduction decrease in line with this sequence. Bacteria reproduce prolifically; trees produce fewer offspring and take longer to reach maturity. The organisms on which all others depend are the smallest and most numerous; those further up are progressively larger and less numerous. Ecological communities have a pyramid-like structure, reflecting the fact that the higher organisms consume more energy, which comes from those further down.

Some of the best places for illustrating ecological succession are the granite outcrops of Western Australia. Dating back to the geological era known as the Archaean, the granites are extremely ancient. Since they formed within the crust, they do not contain fossil soils. Now, however, as a result of the rocks above them having been eroded away, they lie at the surface, subject to chemical, physical and biological weathering. Exfoliation – the erosive shedding of entire layers – and colonisation are taking place hand in hand.

This pattern of progressive colonisation may help us understand why fossils – remnants of organisms in a stack of successive land surfaces – appear in a particular order. If it is true that the stack built up as the world recovered from catastrophe and became progressively more habitable, the order in which they appear should reflect a process of ecological recovery.

The succession will not of course be the same everywhere. A dry desert, for example, is colonised in a different way from a delta plain. Nonetheless, in general the first organisms to make their mark on the fossil record would have been bacteria and algae, followed by fungi, lichens and liverworts (none of which fossilise well), then small plants, then larger plants. Once the environment was sufficiently prepared, at the small plants stage, invertebrate animals, such as millipedes and insects, would have started to play a role.

The competing theory is that the sequence from bacteria to algae (in marine environments) to lichens, liverworts and mosses, to small plants, then larger plants, is an evolutionary sequence. Can you think of criteria that would enable us to decide between the interpretations?