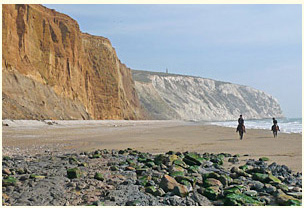 The purpose here is to provide complementary images for the article “How old is the Earth?“, where it is suggested that each chalk bed reflects the cycle of a single year – summer and winter – rather than a Milankovitch cycle of 20,000 years. Although the pattern may be difficult to make out where there are no colour changes or flint bands, the chalk successions of the Cretaceous period are visibly cyclical. They are bedded, the beds are of similar thickness, and each bed reflects an alternation of warming and cooling.

Figure 1 in the article shows a series of chalk/marl couplets from the Cenomanian in Crimea. Grey-scale fluctuations track the proportion of clay in the chalk, from 5–15% in the light-coloured beds to 10–30% in the darker ones, and the proportion of clay corresponds to the intensity of run-off from the land: the more rainfall, the more clay eroded, diluting the microfossils of calcareous plankton that compose the chalk.

Similar couplets are exposed at the classic locality of Culver Cliff, on the east coast of the Isle of Wight, pictured below: 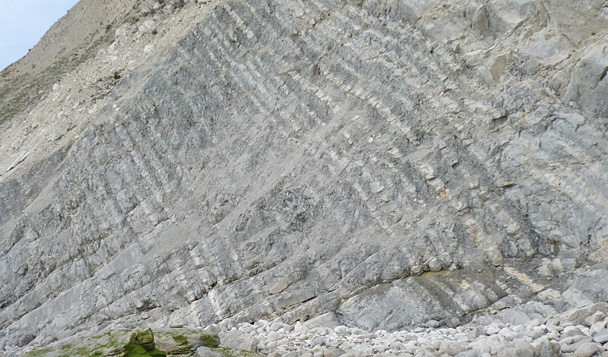 The grey beds are the Chalk Marl. Higher up they pass into the Grey Chalk, which formed as sea-level rose and continental sources of sediment became more distant. Because the darker beds have more clay than the lighter beds, they erode more easily, producing on the wave-scoured foreshore a ribbed pattern. The Chalk Marl interval helpfully makes the body and trace fossils in the sediment more visible. 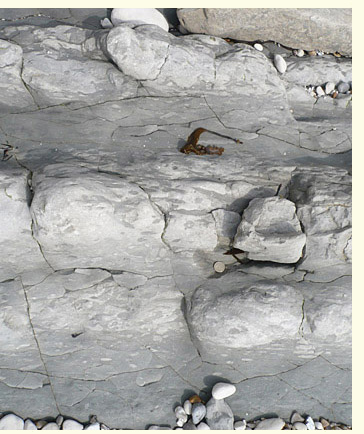 Left: Dark patches and streaks in the chalk-rich beds record the activity of crustaceans and other animals burrowing down from the marl-rich beds – also vice versa with the lighter patches and streaks. The dark beds become less mixed with chalkier sediment towards their middle and are more bioturbated because they are richer in nutrients (attractive to the burrowers). Note that the bedding is not homogenised. In relation to a timescale which attributes 20,000 years to each couplet this is problematic, since burrowers can homogenise a 10 cm depth of sediment in a matter of weeks. The direct geological evidence suggests that the cyclicity is annual rather than precessional (‘Milankovitch’).

The other striking evidence of sedimentation rates being higher than the supposed 0.04 mm per year is the state of fossil preservation. Among the most distinctive fossils is the meandriform sponge Exanthesis. The next photograph shows a large example, 25 cm in diameter. The shape and form of this specimen – siliceous in life but subsequently calcified – are well preserved. After infill of its cavities, the weight of the sponge caused it to depress and sink into the mud, after which more sediment draped over it. That the sponge could have remained intact for thousands of years is difficult to believe.

Unlike most benthic fauna, sponges are immobile, so are unable to keep themselves above sediment that may be ‘rapidly’ collecting around them. The danger is that their pores become clogged and asphyxiate the animals. Exanthesis could not have cemented itself to the surface, 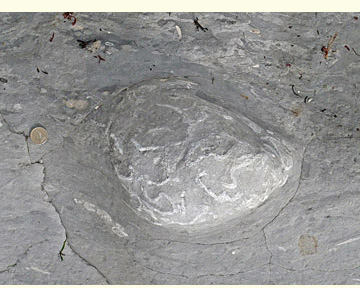 because the substrate was too soft. Probably it would have tried to attach itself by filamentous ‘roots’ but was dislodged from time to time by sea-bottom currents and rolled along. In this way, sponges could have reached ages much greater than one year.

Chalk and marl beds are typical of background sedimentation – indications of what was normal, not catastrophic. Sedimentation rates were many thousands of times higher than modern rates because in the Cretaceous, as in other periods, the Earth was geologically much more active. Because modern rates are infinitesimally slow, it was possible for them to be thousands of times faster in the past and still permit seafloors to sustain flourishing communities.

A note on flint bands

Chalk bedding planes are often marked by variably discontinuous, horizontal bands of flint or chert, composed of silica. This is another mystery for long-age interpretations of chalk deposition. Why was there so much silica in the ocean, why did the chert concentrate in bands, and why was the spacing of these bands so regular? 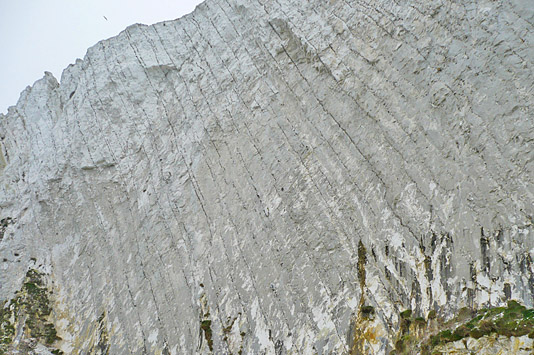 Why was there so much silica in the ocean?

The silica derived from siliceous organisms such as glass sponges and radiolaria (a kind of plankton). As the buried skeletons of sponges broke down, the heat and pressure dissolved the silica into a gel. As it recrystallised, it encapsulated other fossil fauna or migrated into the fills of disused crustacean burrows, which were more porous than the surrounding chalk. In this way flint nodules formed. More fundamentally, silica-producing organisms flourished because of the high rates of hydrothermal circulation at mid-ocean ridges. In this respect the present is not the key to the past:

Radiolarian productivity pulses and related radiolarite deposition are phenomena difficult to understand from an exclusively actualistic viewpoint. Oceanic chemistry and productivity, as well as patterns of circulation/upwelling have changed radically. In addition to plate drift, hypersiliceous domains and intervals are explainable mostly by a large-scale volcano/hydrothermal activity during major plate-boundary reconfigurations. The present biogeochemical cycle is representative only for the overall silica-depleted post-Eocene oceanic ecosystems, which broadly correlates with a major expansion of diatom groups extremely efficient in silica removal.

Dissolved silica concentrations were higher because more silica was dissolving out of the ocean crust. Chert bands (illustrated above) did not develop in marly successions because silica concentrations were lower in cool water, and radiolaria preferred warm water. Hence, as a general rule, the incidence of chert bands increased as the marl component decreased. Cherts can themselves vary from pure to marly.

Why is the chert concentrated in bands and why is their spacing so regular?

Modern radiolaria tend to bloom in the late summer, about the same time as the coccolith flux falls off. In the chalk, flint bands formed at regular intervals, one may infer, because the radiolaria blooms were seasonal. The intervals were generally annual. During burial and dissolution silica-rich fluids most easily passed along bedding planes.