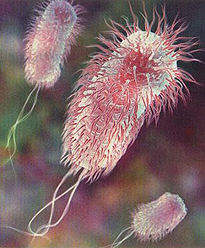 There’s no point in paraphrasing what has already been well expressed. Below we reproduce a digest of recent research into bacteria repair proteins – proteins that not only enable bacteria to repair damaged DNA but to prioritise the repairs according to what is most urgent. We have long known that ordered systems, left to themselves, degenerate over time. It is a universal law, encapsulated in the second law of thermodynamics. However, organisms, for a time, counteract it, being highly ordered systems, whether they be bacteria or human beings, and their DNA code expressly includes mechanisms for counteracting it. How can Nature contradict itself in this way?

The theory of evolution argues that the universe is godless, that the fantastically complex biological programs which govern embryonic development and cell maintenance are accidents, and that accidental mutations of the programs are the very stuff of creation. But genomes themselves resist such aberrations. Accidental mutations are unwelcome, for they do not increase information content or level of organisation. They are frequently lethal.

When the chemical ‘letters’ in a cell’s DNA book of instructions are damaged the instructions become difficult to read and the cell may not function properly. For example, exposure to too much sunshine increases the risk of skin cancer because the ultraviolet light present in sunshine damages the DNA in skin cells and can cause them to grow in an abnormal way.
Because it is impossible to avoid DNA damage, cells have evolved many mechanisms for repairing their damaged genomes. Like council crews repairing damaged roads these DNA repair mechanisms employ individuals with different specialities: sometimes all that is needed is a small patch on the DNA, like filling in a pothole, other times large sections of the DNA need to be removed entirely and replaced.
The repair systems need molecular machines that can detect the DNA damage in the first place, cut away the damaged DNA, and finish the repair by building new undamaged DNA. All these machines must work together in an organised fashion to carry out these very intricate repairs, so they also require machines that take the part of foreman and co-ordinate the work of the others.
When DNA is heavily damaged, cells ensure that the sections that need to be read for instructions (in a process called transcription) are repaired before sections that aren’t being read.
A team led by Dr. Larry Franks from the DNA-Protein interactions Unit in the University of Bristol’s School of Biochemistry has purified each of the many individual components of this ‘transcription-coupled’ DNA repair pathway from the bacterium Escherichia coli and rebuilt the system in a test-tube. This allowed them to investigate the effects of disabling different parts of the different machines and hence work out what is required to prioritise certain sections of DNA for repair. The team found that different proteins take responsibility for spotting damage in different situations, and that one of the machines can turn itself off when it is not working, in order to decrease the ‘fuel consumption’ of the system.

The original ScienceDaily report (10 Dec 2010), along with details of the underlying paper, can be found here.

It may seem inconceivable that genomes actively counteract events that impair their functionality and, being endowed with the machinery, even anticipate such events, but that is what microbiological research reveals. From bacteria to humans, natural things have the quality of the inconceivable because they are products of creation. Only the Creator knows from the beginning what is yet to be (Isaiah 46:10). He alone can do what is impossible.

In the new world there will be no need of repair mechanisms. That being so, repair mechanisms bear testimony to his providence, his superlative engineering, his power to heal. If you have not made your peace with him, consider that he also knows the beginning and end of your life. Human history itself has an end. For ‘just as it is appointed for man once to die, and after that, judgement, so Christ, having been once offered to bear the sins of many, will appear a second time, without sin, to save those waiting for his salvation’. Do you perhaps also need to be repaired? Ultimate reality is not what we see with our eyes, any more than our bodies constitute the ultimate reality of what we are. We can see our bodies, but we cannot see the soul that inhabits them and in its consciousness, in its very manner of speaking, acknowledges the distinction between ‘I’ and the body that the ‘I’ possesses. We are ourselves as invisible as our Maker is.