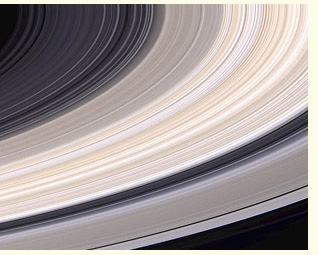 Only 400 years ago – before Galileo – the stars and planets were thought to be pure orbs of light set in perfect crystal spheres. By disproving that ancient view, Galileo’s observations pulled down the curtain between heaven and earth. Venus exhibited phases, Jupiter had its own satellites, and Saturn, far from being a perfect orb, had a sort of collar. Although it would be some time before the collar was recognised as a disc, the implications were clear: the supralunary realm was not a supranatural realm where things existed in a different reality.

Saturn’s rings are majestic and wonderful, communicating something perhaps more profound than any scientific story. But suppose, after contemplating them a while, we ask how they came into being. Does the beauty imply that they must be the Creator’s direct handiwork, as astronomers before Galileo would have presumed? Looking up, they thught they were peering into a heaven where things never changed, a universe still in its original state. But the truth is that these ice particles were not originally rings round the planet but, almost certainly, fragments left by small-moon collisions. One of the rings is fed by vapour ejected from the moon Enceladus. Jupiter, Uranus and Neptune also have rings – faint, unspectacular ones 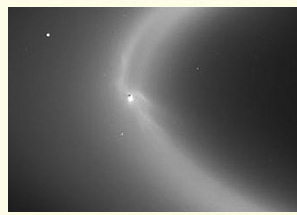 that evoke no wonder. Rings can form naturally: they are not in themselves evidence of creation, however beautiful. That said, the bright purity of Saturn’s rings is partly why astronomers have concluded in surprise that they must be relatively young.

The idea that the world is only 6,000 years old imposes a taboo on looking too deeply. Any appearance of history must be dismissed as inevitable consequence of creation. It seems futile to ask, “How did this state come into being?” Inquiry is shut down – very often at the first fence. The fear is that if one asks open-ended questions about the history of the solar system, the majesty will vanish, and one will end up concluding that nothing was created. In a way, astronomers used to thinking on timescales of billions of years have the same mental block. “Geologists like things to be the same as they ever were,” a NASA scientist told Nature. The unchanging world is “philosophically comforting because you don’t have to assume you’re living in special times” (McKee 2013).

Rejection of creationist dogma is not the same as giving up on the possibility that the solar system originated in creation, even though it may have looked very different and been chemically simpler. In the following pages we look as far back as we can go. The oldest known objects are meteorites, and it has long been assumed that these are remnants of a primeval cloud of dust and gas, called the ‘solar nebula’. However, recent research has shown this to be incorrect. Meteorites and the asteroids from which they derive are fragments of larger bodies, not smaller ones, and some of these parental bodies originated from still larger ones – objects the size of planets. The solar system seems older than its oldest datable objects. How can that be?

The first article considers whether what we know about the planets accords with the belief that they came into existence naturally. The second focuses on the origin of asteroids, moons and comets. 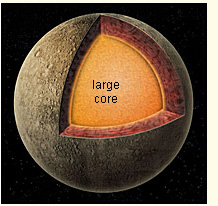 The solar system that we see now cannot be understood as reflecting its original state. The interior of every terrestrial planet melted, dissolving in fire. The largest of these planets exploded. Mercury is now the smallest terrestrial planet, but its unusually dense body suggests that it shed part of its mantle and was originally intermediate in size, bigger than Earth but smaller than the planets which completely disintegrated. The other rocky planets – Venus, Earth and Mars – were blanketed with upwelling magma and pounded by asteroids. The giant gas planets underwent equally transformational convulsions.

This is the scientific basis for taking seriously the words of a man who once sat at the feet of the Creator:
Heavens existed from of old, and an earth arising out of water and through water, by the word of God, through which [heavens and earth] the then world was deluged in the cataclysm and perished.

It was thermonuclear heat from within the Earth that caused the land to rupture and the subterranean deep to break out onto the surface. When the ‘windows of heaven opened’, what they let in was debris from the ruptured bodies of other planets. The rain that fell for 40 days and 40 nights was a rain of asteroids. When, in the early Archaean, the Earth emerged from the waters, it was a baptised reborn planet.