We are born into the world as if from nowhere, souls protesting at entry with all the strength of our perfect lungs as we take up the air around us. But we cannot remember our birth, and as we pass into adulthood, we begin to ask questions about our origin, only to find that man too has no memory of how he came to be.

Existence is a mystery. Having more credulity than curiosity, many assume that the planetary home on which we briefly live had a natural origin. But is it reasonable to attribute nature with its own creative power, even to the extent of producing things incomparably more complex than human technology can engineer? Can human life really be reduced to atoms, contrary to our sense of being distinct from our bodies and the physical world beyond?

In recent decades it has become ever more difficult to ask these questions in an open-ended way. Scientific institutions, educational establishments and broadcasting media all permit but one view of reality: the world created itself. Any other view else is mere religion.

But doubt sidles in nonetheless. We live from day to day knowing that life is something different from molecules. Life involves consciousness, something that plants, which also reproduce via DNA, do not have. Our experience of ourselves as conscious beings tells us that there is more to reality than can be accounted for by molecules, however complex their organisation.

Life is irreducibly wonderful. What we have done in rejecting theistic explanations – in declaring that God was not “a magician, with a magic wand able to do everything” – is simply transfer the power of miracle from God to Nature, using scientific language to dress up a belief in natural magic. Not that creation in 6 days provides a straightforward answer. While the glory of the heavens, the majesty of the continents and oceans and the secret lives of Earth’s animals all appear to deny a natural explanation of their existence, they do not speak directly of creation, because nothing is as it was. Everything lies at the end of a long history.

Moreover, we cannot go back to the beginning because a cataclysm near the beginning destroyed the original land. We have become aware of this only in the last 40 years, as a result of discovering that the Earth’s oldest crust is missing. The impact craters which defaced the Moon just prior to the beginning of the rock record destroyed Earth’s earliest record. Asteroids, combined with torrential flooding, rendered the planet formless and barren. 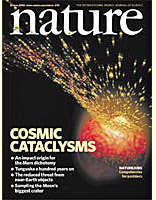 It is this primeval cataclysm that offers the key to understanding the fossil record. After the bombardment the planet was in geological flux. Species had to colonise new seas and lands. Bacteria were the first organisms to appear, not because they were the simplest but because they were the most prolific, and everything else depended on them, not least for the continuing production of oxygen. Other organisms gained a foothold as land surfaces stabilised: mosses, lichens, low-lying wetland plants and forest-forming trees in ecological succession, joined by an equally diverse range of animals millipedes, insects, mites, spiders, scorpions, reptiles.

Evolution has two meanings. The first is the well established fact that all species originate from other species; the second, the presumption that all species, from bacteria to human beings, are related to one another and originated aeons ago from self-organising chemicals. Conditioned to think about such things without thinking, we tend to confound the two. When new species originate, we think we are seeing evidence for the theory that life evolved from a prebiotic soup. In reality there is no such evidence, and documented examples of evolutionary change cannot be explained in Darwinian terms.

That organisms change over time was once perceived as a threat to the idea of creation. In fact the reverse is true. Despite attempts to associate evolution with a blind, random, undirected process, in reality the most spectacular examples of evolution are also the most obviously directed – directed not by an intervening power continually giving a helping hand, but by a genetic code that was programmed to respond to change. Consider what is involved in:

The more spectacular the transformation or prodigal the diversity, the more it becomes clear that such phenomena were not the work of chance but pre-programmed just as the single-generation metamorphosis of a caterpillar into a butterfly, or of an egg into an ostrich, is evidently pre-programmed. Evolution of this kind in no way implies the denial of an original creation. Survivors from the cataclysm were endowed with enormous potential to diversify because there were so few of them. They were endowed with the potential to adapt because they had to colonise a world that, beginning from total devastation, had to pass through multiple stages of ecological renewal. 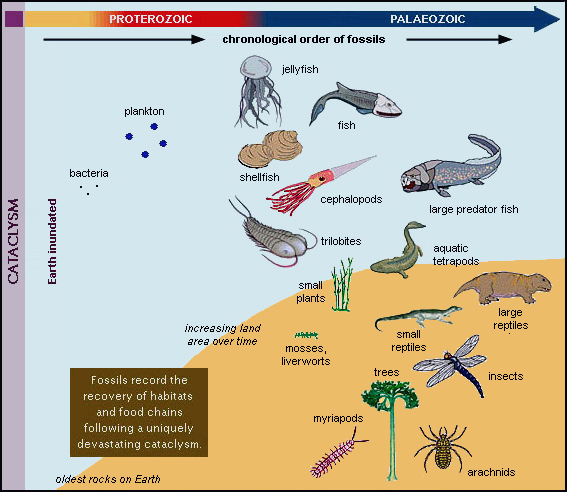 How this website is organised
Earth history took place over a succession of ages, and inevitably the names of these ages will be unfamiliar to most readers. Regrettably, Earth history is not taught at school, and adults know almost nothing about the origin of the world they are born into, so some patience will be needed while you get used to the terms. The organising principle of the site is primarily chronological.
In addition:

This is a quality site, honouring good scholarship and seeking to be a trustworthy voice amid a cacophony of voices speaking on the same topics. The less you skim, the more you will get from it. If you are looking to understand the meaning of Earth history, this site will help you.