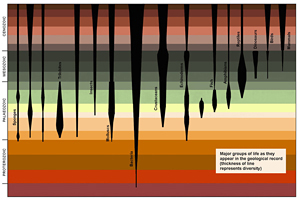 The sudden appearance of complex marine life in the Cambrian is perhaps the most striking and perplexing phenomenon in the whole fossil record. According to one authority:

At the beginning of the Cambrian Period, within a span of a mere 10 million years, all the major groups of complex animal life, all the phyla, appeared. Ten million years may seem like a vast stretch of time: by most criteria it is a lot of time. But consider that nearly 3 billion years had already gone by since life had left its first traces in the fossil record. And consider, too, that no new phyla are known to have originated since the early Cambrian.

Here again we find a familiar pattern, on a truly grand scale: relatively suddenly, the whole spectrum of invertebrate life, including sponges, brachiopods, arthropods (trilobites, chelicerates and crustaceans), mollusks, plus spineless chordates in the same phylum as the vertebrates, burst on the scene, the world over. By the end of the Cambrian we have records for all the major groups of hard-shelled invertebrate organisms, and some evidence that vertebrates had appeared as well.

What could have caused such a proliferation?

The proliferation is commonly referred to as the ‘Cambrian Explosion’: an explosion of animal life bursting on the fossil record as if from nowhere. Indeed the creativity represented by this invasion of novelty was so extravagant, so beyond the bounds of what one might imagine Nature itself producing, that there were more phyla then than there would ever be. That is because many of the novel body plans that appeared in the Cambrian subsequently became extinct.

The Explosion is problematic for two reasons: why do we not see a host of simpler forms, progressively less distinctive as one goes back in time, showing that all these disparate phyla were in fact interrelated; and why did the various phyla that characterise marine life today, as well as those that became extinct, all appear more or less at the same geological moment? Despite the huge resources expended by universities across the world, these problems remain unsolved. Occasionally new fossils turn up which push the oldest representative of this or that phylum slightly further back in time, but they do nothing to illuminate the origin of the particular phylum itself.

Of course, if we abandon the Darwinian presupposition of interrelatedness and postulate instead that all the basic body plans were created at the beginning, the first of these problems disappears. What we are left with is the question of timing. Evidently the body plans were not created in the Cambrian. The Cambrian period comes after a long stretch of time when non-animal forms of life, predominantly bacteria, algae and ‘acritarchs’ (unidentifiable plankton) already existed, as the fossil record confirms. Animal forms of life must also have existed. Although they eluded fossilisation, ancestors of the Cambrian brachiopods, branchiopods, gastropods, myriapods, (the extinct) trilobites, chelicerates, crustaceans, molluscs, cnidarians, comb jellies, echinoderms, (the extinct) graptoloids, flatworms, roundworms, segmented worms, radiolarians, chordates and the extinct phyla that do not fit into any modern group must have existed somewhere and in some form long before.

Geological time goes back to beyond the Archaean, so we must assume that these ancestors had been living in the oceans since at least that time. Only, they were too few in number to make a mark on the fossil record; they cannot have had any distinguishable hard parts, such as bones, or shells; and in all probability they were mobile rather than sessile, swimming or floating at the surface as far from potential burial by sediment as it was possible to be. Something – some change in global conditions – must have happened in the Cambrian to trigger, simultaneously, a fundamental change in physiology in every phylum that now began to have a fossil record.

Genesis suggests that the seas created on the third day of creation were primarily underground seas (see The antediluvian world). Lakes may have existed at ground level, but since all terrestrial surfaces were destroyed in the Hadean Cataclysm, the only aquatic creatures likely to have survived would have been those that lived in the dark. A great variety still live below the 200 metre-deep photic zone. In view of the failure of such life to make its mark on the Precambrian record, we should probably be visualising organisms that were geographically restricted and very small.

During the Archaean, magma welling up from below replaced the land that was shattered at the end of the Hadean. Sea temperatures in the Archaean were high – some estimates have them averaging in excess of 60° C. Submarine volcanism spewed large volumes of dissolved iron, manganese and sulphur into the oceans, and made all but the surface layer, where photosynthesising cyanobacteria pumped out oxygen, poisonous to animal life. Since the high temperatures and high concentrations of iron stopped the oxygen from diffusing or circulating downward, it escaped into the atmosphere. In low-latitude seas bacteria and algae flourished, but animals – the ancestors of those that appeared in the Cambrian – were probably confined to the poles. Recolonisation of the seas nearer land would not have been possible until:

These conditions developed in the course of the late Proterozoic. Prior to that stage almost the only signs of life on the seafloor were stromatolites – layered mats produced by microbes. As the seas became more oxygenated, stromatolites became less common. Higher in the water column, plankton and microplankton also began to recover. 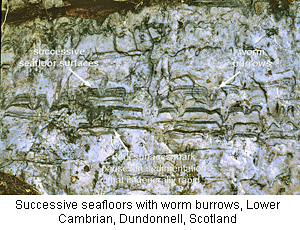 Then, towards the end of the Proterozoic, a strange array of soft- bodied organisms known as the Ediacaran fauna suddenly appeared. Some of them were fixed to the seafloor by holdfasts and, where fossilised, commonly buried in life position. They occur at this time in many parts of the world, from the Ediacara Hills of Australia to Charnwood Forest, England. With few exceptions, such as sponges, none seems to have been ancestral to later organisms, and most forms became extinct before the Cambrian. Then, at the very end of the Proterozoic, worms began to penetrate the sediment, leaving the first trace fossils in the form of horizontal meanderings and vertical burrows.

In seeking to understand what led to the Cambrian Explosion, palaeontologists speak of the “Cambrian substrate revolution”, in which barren seafloors (substrates) were turned into habitable space for almost the full range of seafloor-dwelling organisms. The story is as much one of colonisation as of evolution. Appearing as if from nowhere, worms, molluscs, trilobites and so on were all benefiting from the recovery of marine animal life further down the food chain. Faecal pellets dropped by zooplankton attracted animals that now had sufficient oxygen to graze and burrow on the seafloor. 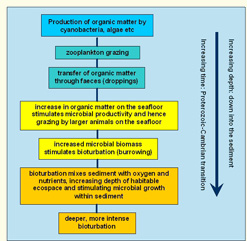 As they consumed the droppings, they churned up the sediment, aerated it and fertilised it. Their actions, in turn, prepared the ground for other burrowers to live in and feed off still greater depths of sediment.

Evidently the organisms which brought about this revolution did not come into being ex nihilo, unseen and as if by magic. Nor did they arise as products of the great ‘struggle for existence’, acquiring little by little new capabilities and levels of organisation as they out-competed their rivals; for then sediments should have abounded with their ancestors. The simplest explanation is that in some shape or form they already existed. They appeared in the fossil record as they increased in number and as the increasingly benign environments around the coasts allowed for their increase. In a jump shift analagous to the miraculous way in which many fossilisable creatures – barnacles, for instance – start out as unfossilisable larvae, the new conditions triggered radical pre-programmed transmutations.

In relation to the Precambrian-Cambrian transition as a whole, marine organisms appeared successively – first primary producers, then zooplankton, seafloor-dwelling herbivores and immobile filter-feeders, then swimming and seafloor-dwelling carnivores and deposit-feeders, finally large predators. This is the true meaning of the order of fossils. Organisms higher up the food chain depended on those lower down and were not programmed to reproduce as numerously. In all its diversity marine life was designed as a complex community. 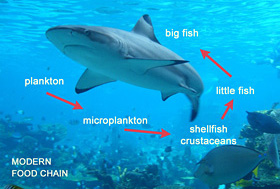 As a recent analysis demonstrates, the food webs of the Cambrian were ‘remarkably similar’ in structure to modern food webs. Fundamentally, marine food chains changed little over time, just as, fundamentally, the organisms that composed them changed little. By the Middle Cambrian nearly all the phyla of the marine realm had made themselves known. The subsequent history of marine life was, by comparison, merely a medley of variations on themes introduced at the beginning. The disparate organisms that appeared in the Cambrian were linked by food chains, not evolutionary chains. There is no evidence that zooplankton evolved from bacteria, or that worms, molluscs, sponges and so on evolved from zooplankton.

Darwin’s theory of evolution requires the evidence of ‘numerous, fine, intermediate fossil links’. He imagined that in the vast ages before the Cambrian the world must have ’swarmed’ with living creatures. But what we find is revolution, not evolution: an explosion of life forms as continental platforms began to be colonised by recovering populations from elsewhere – presumably, from shallow-marine polar regions. Starting with bacteria and climaxing with sharks, it was an ecological progression, something that occurred over thousands of years, not three thousand million.

Next: The first steps from sea to land