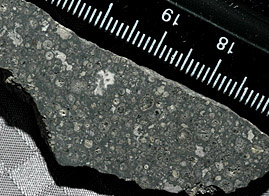 To most people, the exact age of the solar system is of minor interest and soon forgotten. What usually inspires the question is a desire to get some sense of time’s immensity. We would like to go back to the beginning and imagine a time when there was nothing, and then contemplate the marvel that out of that nothing came the Sun, the Earth, all the planets, and every detail of our modern lives. Most importantly, we would like to know whether the beginning was a very long time ago, long enough to support the belief that our world came naturally into being – or a short time ago, short enough to rule out the possibility of a natural origin.

Here is an explanation of how scientists working within the standard world-view go about answering the question:

The age of the Solar System can be defined as the time of formation of the first solid grains in the nebular disc surrounding the proto-Sun. This age is estimated by dating calcium/aluminium-rich inclusions in meteorites. These inclusions are considered as the earliest formed solids in the solar nebula. Their formation marks the beginning for several long- and short-lived radiogenic clocks that are used to precisely define the timescales of Solar System events, such as the formation and evolution of planetary bodies. Here we present the 207Pb/206Pb isotope systematics in a calcium/aluminium-rich inclusion from the Northwest Africa 2364 CV3-group chondritic meteorite, which indicate that the inclusion formed 4,568.2 million years ago. This age is between 0.3 and 1.9 million years older than previous estimates and is the oldest age obtained for any Solar System object so far.

So the orthodox answer is just over four and a half billion years, the universe having already been in existence for about nine billions years.

But how should we evaluate the answer? The key point is the assumption that the solar system originated from a nebula: from a cloud of gas and dust left over from the explosions (supernovae) of previous stars. Among the elements so created were radioactive metals such as uranium-238, present in the calcium-aluminium-rich blobs (‘CAIs’) that occur in some meteorites. Thus, by measuring the ratio of the parent to its decay product, lead-206, and relating this to the known half-life of uranium-238, we can determine the date when the blobs formed. The date can be checked by performing the same calculation in relation to another uranium isotope that decays into lead-207.

Adopt, however, a different set of ground assumptions and you may come to different conclusions. Radioactive decay in the past may have been faster than today. Radioactive elements could have been synthesised within the cores of planetary bodies as well as the cores of massive stars. Meteorites and their parent asteroids might be the exploded remains of planets that melted in the course of runaway thermonuclear reactions rather than bits of primitive material that failed to coalesce into planet-sized bodies.

There is indeed good evidence that meteorites and their inclusions are evolved components of much bigger bodies (see link below). In that case, radioisotope dating cannot measure the age of the solar system. It can only go back to just after the time when a primeval planet, somewhat larger than our own, underwent catastrophic melt-down. Estimates of the age of the oldest meteorites vary. They vary because the melting, fast though it was, was not instantaneous, and the core of the parent body melted faster and reached hotter temperatures than regions further from the core. The material composing a meteorite might have come from any level. Furthermore, how long this episode occurred after the solar system’s beginning cannot be measured, because radioisotopes in the solar system all originated after that time. Instead, one has to look for radioactive elements that were synthesised in massive stars soon after the origin of the rest of the galaxy, on the assumption that the galaxy and the solar system are of the same age.

That has been done, and a date of around 13.2 billion years arrived at. Still to be determined – or at least estimated – is the rate at which radioactive decay has been slowing down, thereby enabling us to convert 13.2 billion years into true time. Only then can we come close to the age of the solar system.