Skip to content
1. The order in which bacteria, other microscopic organisms, shelly invertebrates, plants, mammals and humans first appear in the fossil record is shown clockwise around a dial representing geological time. For the first 3 billion years the pace of evolution (if that is how to interpret what is going on) remains puzzlingly slow, until a bewildering array of macroscopic organisms appears, abruptly and belatedly, in the Palaeozoic. 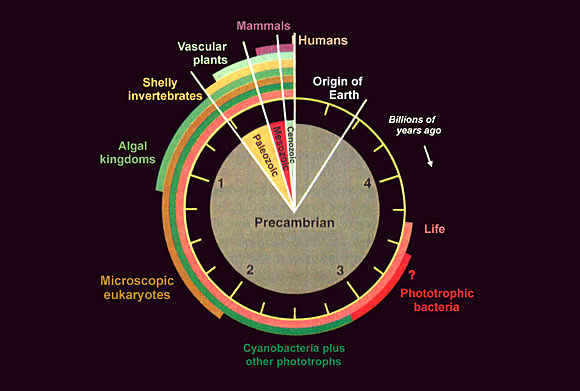 2. The same order of appearance is represented in much the same way, but here the 600 million years allocated to the Hadean are identified with the closing stages of the antediluvian period, culminating in the 40 days of wrath described in the Genesis tradition. Rates of radioisotope decay, assumed constant in the conventional timescale, are inferred to have exponentially decelerated. Ages based on current rates of decay therefore exaggerate true time. The 550 million years between the first appearance of shelly invertebrates and the first appearance of large mammals equate to tens of thousands of years in real time. The overall pattern is one of gradual recovery from a universal cataclysm. 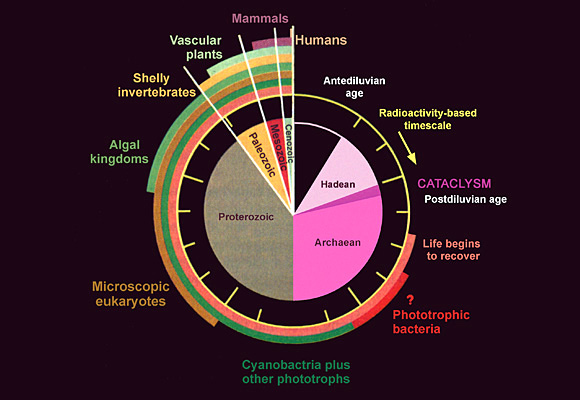 More on how the Hadean and Archaean fit into Earth history may be found at:
The Hadean cataclysm
Water everywhere
The old world destroyed

For a view of how the fossil record looks when isotope time is converted to an approximation of true time, see:
Time out of all proportion?