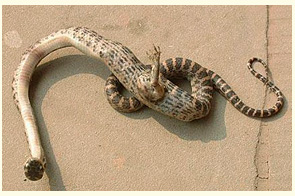 “Upon your belly you shall go.” If you think about it, this curse on the serpent in the Garden of Eden implies that the earliest such animal had legs – an idea whose veracity was not confirmed until our own time, in 1997, when Michael Caldwell and Michael Lee re-examined the snake fossil Pachyrhachis and discovered that it had vestigial hind legs. The serpent that charmed its way into Eve’s heart was a lizard, condemned almost as soon as it was created to lose its legs (though not necessarily all of a sudden). Not only are snakes all related to each other, but snakes are all related to lizards – some 8000 species in total. So far as the Bible is concerned, creation and evolution are not mutually hostile concepts.

This 2nd-millennium-BC ‘prediction’ about the fossil record is remarkable. How could the author of Genesis have known? Did he perhaps stumble across a mutant with hind legs, like the one above, photographed in China (possibly a fake)? Did he come across a python’s dried-up skeleton and, noticing the vestiges of a pelvic girdle and posterior limbs, simply make an inspired deduction? Or maybe he turned up a fossil snake? Fewer than ten fossil snakes are known with hind limbs, and three are from the Middle East, two from a quarry near Ramallah, and a third from Lebanon. A fourth possibility is that the text had an origin in oral tradition going back to the curse itself.

There are two ways of working out the phylogeny (family tree) of living animals. One is by analysing their genes; the other is by analysing to what extent they share similarities in form. In either case the results can then be integrated with the fossil record. In principle, the two approaches should be complementary and lead to a consistent account of how modern snake and lizard families – squamates – descended from a single lizard stem. In practice, establishing a plausible phylogeny has proved difficult, mainly because of shared features that criss-cross the family trees. To the embarrassment of the theory, or faith, that evolution is a chance process, some of these features must be taken to have arisen independently. Research over the past two decades has spawned many phylogenies, each claiming to supersede its predecessors on the grounds that 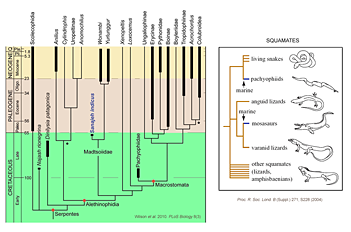 it includes more data. Two examples are shown, one analysing morphological and fossil data for snakes, the other analysing molecular data for all squamates. It is true that the oldest lizards long predate the oldest snakes in the fossil record.

The record of snakes is poor, partly because most snakes inhabit terrestrial environments, which are usually places of erosion rather than deposition, and partly because the skeleton is delicate and quickly decays. The oldest fossil, Lapparentophis, from the Lower Cretaceous of North Africa, consists only of a few vertebrae. The three hind-limbed fossils from the Middle East (Pachyrhachis, Haasiophis and Eupodophis) are better preserved because they were aquatic snakes buried in marine deposits. A lump of mid-Cretaceous amber from Myanmar preserves an almost complete, but headless, baby snake. The largest snake known, a Palaeocene-age boid 13 metres long from Colombia, aptly named Titanoboa, also consists of a few gigantic vertebrae. One sensationally well-preserved fossil shows a snake in the act of coiling round the eggs of a dinosaur.

The earliest squamate is a lizard from the Middle Triassic, recently discovered in the Italian Alps. It has been given the name Megachirella. Among extant lizards the least evolved are the geckos. As neither geckos nor their closest relatives are poison- ous, venom appears to have been a later innovation, restricted to bearded lizards, monitor lizards and iguanians (with venom glands in the lower jaw) and some snakes (with the glands in the upper jaw). There are many kinds of venom, but presumably the common ancestor of all snakes plus these lizard families was venomous and earlier squamates not. In the course of evolution, most snakes became non-venomous again.

Among extant snakes the largest superfamily is Colubroidea, including colubrids, elapids, vipers and two other families. Colubrids appear in the Oligocene. They had greatly enlarged teeth at the rear of the jaw. In the later-appearing elapids the fangs were at the front of the mouth, where they could be used for striking prey as well as incapacitating prey already seized. The grooves channelling the venom were deeper than with the rear-fanged snakes and met at the edges to form a hollow tube; the venom was injected as through hypodermic needles. Elapids include the cobras, mambas, sea snakes and various coral snakes.

The first elapids were followed by the first viperids. Viper fangs are longer than in the elapids – so long that, without a further innovation, they would not be able to close their mouth. A special rotating bone enables the fangs to be folded up, ready to spring into position when the snake bites. Evolving still further, pit vipers acquired a number of heat-sensitive pits on the front of their face, for seeking out shade by day and detecting warm-blooded prey by night. The Malayan pit viper is sensitive to a temperature change as small as one thousandth of a degree. Boids independently acquired the same feature. Finally, one group of pit vipers – the rattlesnakes – developed a unique warning device at the end of their tail.

As well as being legless, snakes differ from lizards in having a highly mobile skull, an enclosed braincase and no external ear. Some lizards also lack legs. Another sign that snakes were not created in their present form is the loss or reduction of their left lung. Primitive (least evolved) snakes usually have two functioning lungs, with the left lung about half the size of the right. In the colubrids the left lung has either disappeared or shrunk to a functionless nub, so that the elongated right lung fills much of the body cavity, doing the work of two. Other paired organs, such as the kidneys and in some cases the oviducts, may also be reduced from two to one.

A further difference lies in the structure of the eye. Lizards focus by contracting the large ciliary muscles around the eye and either squeezing the lens into a rounder shape or flattening it; they focus by changing the lens’s diameter. Snakes focus by using their enlarged iris muscles to move the whole lens forward or backward and thereby adjusting the focal length. The rationale behind this different method is unclear. They also have no eyelids, instead protecting their eyes with a transparent scale called a ‘brille’.

As conventionally understood, evolution works by the gradual accumulation of tiny accidental genetic mutations that spread through a population because the mutations make the body slightly better adapted to its environment and thus better equipped to leave offspring. In reality, that is not what Nature shows. Indeed, lizards should not have evolved into snakes at all, since losing their legs should have been decidedly disadvantageous – just as if we were to lose our legs. Nonetheless snakes move around with amazing facility. Far from becoming extinct in the great ‘struggle for existence’, they occur on all but one of the continents, in cold climates as well as warm, and in a great variety of environments. Some slither forward by creating S-shapes with their bodies; the body undulates from side to side, pushing with the outer edges of the curves against irregularities in the ground. Others use a concertina motion, first contracting the front part of the body to bring up the rear, then contracting the rear in order to extend the front. Boas and pythons move by lifting and pushing their belly scales forward, then down against the ground.

Some snakes have made a virtue of leglessness by becoming burrowers and spending most of their time under ground. Others have flattened their tails into paddles to become efficient swimmers. Some have defied their handicap by developing an ability to climb up trees and live above ground. Going one better still, a few, known as flying snakes, will sometimes leap into the air from one tree to another, over tens of metres – perhaps the ultimate paradox for such an incapacitated animal, and the most compelling demonstration that God can do anything. 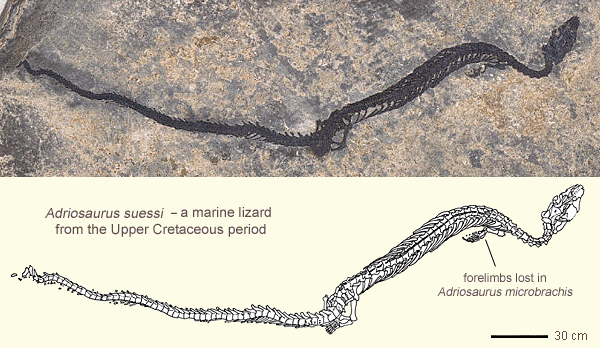 Limb loss in snakes and lizards also tells us about limb origins. In all animals, limbs are regulated by Hox genes, switch-boxes that control the expression of entire modules of genes at specified domains along the body axis. As an embryo develops, arrays of perfectly co-ordinated algorithms at the proper time switch on as a package, so that limbs are lost when the expression of a pre-existing module is inhibited or arrested but grow when expression is allowed to run its course. Hence the sudden and almost complete loss of forelimbs in the aquatic lizard Adriosaurus, or the same loss in aquatic snakes. Pythons still have most of the genetic software to grow leg bones, but it works only during the first 24 hours after the egg has been laid – after that, the rudiments degenerate, apparently because 17 specific DNA base pairs have been deleted. The genes which control limb development were designed as a functioning whole, not self-assembled from a random pile of bricks.

Convergences – features that arise independently in different lineages – underscore this understanding of the mechanisms. Limb loss occurs among lizards as well as in all snakes, and has occurred several times even within well-defined lizard subgroups, such as amphisbaenians (one genus of which still retains forelimbs). Body elongation is always accompanied by limb reduction, and usually the forelimbs are lost first. The green tree-python of Papua New Guinea (Morelia viridis) and emerald tree boa (Corallus canina) of South America, species at the end of different evolutionary lineages and separated by an entire ocean, incorporate multiple convergences (Weidensaul 1991). Both are arboreal constrictors that specialise in catching birds, both are lime-green with white markings down the spine, and both rest in the same fashion, with coils wrapped round a narrow branch and the head nestling in the middle. Sometimes the same patterning in different species has the purpose of ‘Batesian mimicry’. In the case of the scarlet king snake, its close resemblance to the venomous coral snake deters bird predators: the scarlet king belongs to the colubrid family, the coral snake to the elapids. Another striking example is heat-sensitive pits, which evolved in boas and several lineages of the python family as well as pit vipers.

Convergence is also encountered at the molecular level. Perhaps the most remarkable instance concerns a study of mitochondrial genes suggesting that agamid lizards are more closely related to snakes than to lizards even of the same family, contradicting inferences based on nuclear genes (Castoe et al 2009). Such findings undermine the assumption that evolution is a random, non-teleological process, in which complex structures (which genes are) could be expected to come into existence only once. Life is clearly no accident.