Skip to content
This is the second of a two-part discussion of the origin of the solar system. The first may be accessed here. Below we focus on the origin of the smaller bodies: asteroids, moons and comets. Orthodox cosmology links them to the formation of the solar system, and dates the formation on that assumption. This article argues that the solar system is older than its small bodies, and that the objects are fragments of exploded planets, causing the cataclysm known as the Late Heavy Bombardment. The fall-out from asteroids and the large amount of water that soaked the solar system at this time correspond to the events said to have marked the onset of ‘Noah’s Flood’. 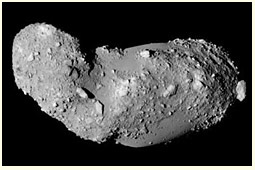 Most meteoroids (which end up as meteorites if they land on Earth) are fragments of asteroids (their ‘parent bodies’), and most asteroids are fragments of larger asteroids, breaking up as they collide with each other. The largest are hundreds of kilometres across, the size of some moons. But whatever their size, asteroids are thought to be the remnants of a primeval cloud of dust and gas that, over a few million years, aggregated and condensed into the various bodies of the solar system. Most of the remnants ended up in a belt between Mars and Jupiter, where they were prevented from reaching larger sizes by the disruptive influence of Jupiter’s gravity. The latest count puts the number of those large enough to be detected at around 700,000, though their total mass remains miniscule. At the start, their mass is estimated to have been 1000 times greater, around that of an Earth-sized planet.

That is the text-book explanation of their origin. However, several leading researchers are exploring possibilities that to a large extent challenge this view. As has become ever more apparent, the galaxy in which the solar system resides is a violent place. Jets of plasma spew from newly born stars, massive old stars explode into supernovae, a gravitational sink at the centre of most galaxies gobbles up everything within its reach. In its early days the solar system itself was a violent arena, crowded with planetesimals rising through the ranks and erratic ‘oligarchs’ slugging it out for a limited number of permanent positions. Computer simulations re-enact the battle:

In many cases, the smaller planet escapes from the collision highly deformed, spun up, depressurized from equilibrium, stripped of its outer layers, and sometimes pulled apart into a chain of diverse objects. Remnants of these ‘hit-and-run’ collisions are predicted to be common among remnant planet-forming populations, and thus to be relevant to asteroid formation and meteorite petrogenesis.

In an effort to explain the genesis of the un-Earthlike Moon cosmologists propose that the Earth itself collided with a planet: the latter vaporised in the encounter and then partially re-constituted itself to produce the Earth’s satellite. A glancing blow by a giant asteroid may have been the event that flattened Mars’s northern hemisphere. Certainly something remarkable must have happened to generate the dichotomy between its highlands and lowlands. Venus, to end up upside down, must have come close to another planet if it did not collide with it. And Mercury, a tiny planet with an exceptionally large core, ended up losing most of its mantle. With impacts occurring with this frequency and on this scale, it seems probable enough that at least some present-day asteroids originated from bodies substantially larger than themselves, in planets rather than primordial grains of dust.

According to the orthodox chronology, it was not until hundreds of millions of years after the planets had emerged that the solar system quietened down. Mars’s cataclysm occurred during its ‘Noachian’ period, very early in its history. Subsequent impacts gouged out basins up to 3,300 km across, in a storm, or series of storms, that rocked the entire solar system. Meteorite ALH 84001 – a chunk of Martian crust presented, like the Black Stone of Mecca, as proof that Mars once hosted life (a claim now largely discredited) – preserves a record of that bombardment in its own fabric. Impact craters pockmark the surface of every terrestrial planet, including the Earth. If we can read from the face of the Moon our own planet’s history, the bombardment climaxed only shortly before it ceased, more than 600 million years after the solar system’s origin.

What was going on? Planets supposedly grew in inverse proportion to the amount of material remaining, so why was the solar system not long since swept clean of leftovers from the formation process? Why was the cessation of the bombardment so abrupt?