In Copernicus’s day it was assumed that the sun and the planets were unique. Stars had a different nature from either, and there were no other planets. In the 19th century the sun proved to be essentially the same as stars and situated in a galaxy that consisted of many more than could be seen with the naked eye. The revised assumption was that there was only one galaxy. This continued to be the picture as late as the 1920s. Now we know that there are billions of galaxies and – as became apparent in the 1990s – following even more powerful telescopes, that some stars are encircled by planets. Inevitably and often unwittingly we make assumptions on the basis of our ignorance. As knowledge increases, certain assumptions have to be abandoned, theological ones as well as scientific.

Genesis indicates that something illuminated the Earth before the sun shone but otherwise says nothing about the nature of the heavens beyond the solar system. Nonetheless, the statement that God brought light into being and separated the light from the darkness is of high significance. Two distinct events are mentioned: first, the heavens were energised so as to radiate light, and then, the matter which gave light was separated from that which did not. The universe became something inhomogeneous instead of a uniform sea of light and darkness. In the Earth’s neighbourhood the outcome was a light-giver that subsequently spawned the billions of stars that make up the Milky Way. Elsewhere, the matter of the universe was contracted into similar globes of light.

Light is electromagnetic radiation, and most electromagnetic radiation is radiated at wavelengths invisible to the eye, from gamma rays at one extreme to radio waves at the other. The famous cosmic microwave background (CMB) consists of electromagnetic radiation stretched out to wavelengths not quite as long as radio waves – a sort of ultra-high redshift. CMB photons are the most abundant particles in the universe and their energy exceeds that of any other source. Though the interpretation has been challenged, they appear to be primordial. The radiation is pervasive in all directions, both above and below the interfering plane of the Milky Way, and shows no centre of origin (see section 4 for why this is problematic). It is also relatively smooth, with tiny irregularities – contrary to the Big Bang prediction of a homogeneous universe and unlike the desert punctuated by massive concentrations of matter that is the actual universe.

If the universe were purely baryonic [composed of visible matter], it would be hard to reconcile its present highly structured state with the small amplitude of the primordial fluctuations implied by the microwave background anisotropies [irregularities].

The galaxies are themselves irregularly distributed:

A census of the galaxies reveals a startling property of our universe: Galaxies are not dotted randomly throughout the cosmos but are generally concentrated in groups or clusters, which are themselves connected by a multitude of filaments known as the cosmic web. At first sight, this observation stands in stark contrast to our knowledge of the state of the early universe, which was remarkably smooth, as inferred from the almost uniform temperature of the cosmic microwave background over the sky.

The radiation has a temperature of 2.7 degrees Kelvin, and the Big Bang is read into it on the assumption that it emanated from matter that had cooled, through expansion, down to around 3000 K. Before then, the universe was dark. Whenever an electron tried to combine with a nucleus, a hurtling photon stripped it away; and because the plasma was so dense, a photon could not travel far before it bounced off a nucleus. Below about 3000 K, photons became free to radiate. The CMB is interpreted to be this radiation redshifted by a factor of 1,100 (2.7 x 1,100 = 3000). As the density of the expanding universe continued to increase, darkness returned, until gravity took hold of inhomogeneities in the distribution of matter and clumped it into clouds of hydrogen that condensed into stars. Then gravitational energy reversed the cooling trend and led to much higher temperatures.

The CMB is thus presented as confirmation of the Big Bang and inextricably bound up with it. However, confirmation comes easy when earlier failed predictions are set aside and the explanation now being confirmed is the only show in town. Suppose, instead, that Genesis, persisting in the background but assumed to have been superseded long before these discoveries, gave us the key. Suppose that the primeval universe was not expanding. If all the detectible matter were evenly distributed through the universe as currently measured, its density would be around 1 atom for every 5 cubic metres, plus many more photons, which have no mass. In such circumstances the universe would still have been dark. Light would be the consequence of energising the matter particles so that they had the property of temperature and began to radiate photons, and the separation of the light from the darkness would be the concentrating of these particles into massive balls of fire, 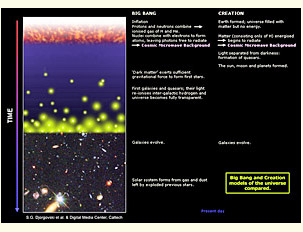 – the oldest detectible points of light we call quasars. The CMB would record the stage when the universe was warm but still homogeneous. The very tiny irregularities in radiation would be the afterglow of matter just as it was beginning to be concentrated into luminous bodies.

As far as we know, there is no matter at all in the voids between galaxy clusters, and only the sparsest wisps of ionised hydrogen (hydrogen atoms stripped of their electrons) between the galaxies making up the clusters. When God separated the light from the darkness so that there were only quasars, which later gave rise to the clusters, he left nothing in the intervening space other than the radiation from the once ubiquitous matter.

So we have a scenario that is not totally at variance with the received interpretation: early on, the universe was a homogeneous expanse of radiating matter; subsequently, luminous bodies separated out of this expanse. The Big Bang model attributes the radiation to adiabatic cooling of a plasma whose initial condition was hot, and attributes the appearance of luminous bodies to a fortuitous property, gravity, that locally reversed the universal explosion. Genesis maintains that the illumination of the universe and the separation of matter from dark nothingness was the work of God. Supernatural input was necessary for these things to occur. Until it was energised, matter could not have begun to radiate. Nor could gravity have produced the massive inhomogeneities in the universe, for a perfectly smooth fluid with the same density everywhere would have stayed homogeneous for all time; indeed, there was no gravity until matter was energised. The chronology is also different: less than a day, as against 400,000 years.

Genesis has a lot going for it. As Ibata and Lewis concede, the almost uniform temperature of the CMB is incompatible with the assumption that tiny inhomogeneities were concentrated by gravity into the clumpy universe we see around us today. That is why scientists have to hypothesise that 96% of the universe consists of an unknown kind of energy and an unknown kind of matter: ‘dark matter’ is needed to provide the gravitational force that counteracts the expansion. We cannot get from the hypothetical Big Bang to the present day on the basis of known reality.